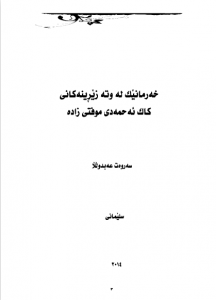 I read this book as part of my reading of all available material on Ahmad Moftizadeh. It is a short book of a little over 100 pages. Below I will mention some of the ideas and quotations I found interesting.

Regarding education, he says that the best way to raise Muslim children is for the parents to be good, spiritual Muslims, meaning that teaching them technical things about Islam is of secondary importance. Sending your child off to Quran school while they are treated with disrespect and abuse at home is not going to turn them into good Muslims. Their main idea about Islam will come from their parents and the rest of the people they see around them who are supposedly Muslim.

O God, if possible, place all the troubles of this world on my shoulders so that no on else may suffer.

The above is an expression of his love for humanity and his willingness to suffer and die for people’s sake. His unconditionally loving attitude toward people was perhaps the greatest reason why he attracted so many devoted followers.

Changing society is secondary and is a consequence of changing individuals. it is individuals that must first be changed.

The purest state of humanity is childhood. The purest human is a child. It is children who most deserve to be served and taken care of.

I am not sold on this idea, because an adult is just a child into whom decades of effort have been poured. When the time comes to decide between allocating resources to children versus adults, who should be given preference? Moftizadeh suggests it is the child, but I don’t see this as a clear choice. Serving an adult so that they can become productive members of society can make it more likely that children will be served.

Taking faith away from people is like taking instincts away from animals.

Meaning that without faith, humans will be as lost as animals would be without their instincts.

I swear to God, in all honesty and frankness, that true faith in God cannot exist in the heart of someone until that heart loves the poor.

The first pillar of religious activism is the love of the poor.

When a Muslim's past is not burdened with sins and disobedience of God, their eyes do not become veiled by delusion and they know that God continues to love them.

Meaning that when hardship strikes, a person who is close to God will not think badly of God and think that He dislikes them and enjoys punishing them.

Related articles
“I am tired of fighting and tired of trying…”Islam and Depression: A Survival GuideA Biography of Ahmad MoftizadehIs lack of hardship a sign that God does not love you?A Muslim who cannot escape the guilt of a sinful lifeHer abusive parents make her feel depressed
« Feeling more spiritual with friends, less spiritual when aloneWhy is sexual harassment of women common in Muslim countries? IQ and development, not religion »
Learn Quranic Arabic with my book!
Available in both paperback and Kindle formats.