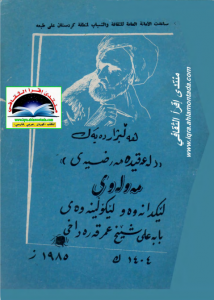 Mawlawi Tawagozi (1806-1882, known simply as Mawlawi in Kurdish) was an Islamic mystic and one of the great poets of Kurdistan, belonging to the Hawrami minority that I belong to. This book is a 160-page commentary on a small selection of Mawlawi’s 2450-verse poem Aqiday Mardia (The Approved Aqeedah), which tries to offer a journey through the field of Islamic theology, mentioning the foundations of belief (aqeedah), philosophical arguments by detractors, and Ashaari responses to them, with Sufi language and feeling spread throughout.

The poem is written in the Sorani dialect rather than Mawlawi’s native Hawrami, and makes ample use of Arabic and Farsi as classical Kurdish poetry does. It was finished in 1864 CE.

I stumbled on this book on the internet and was immediately interested, since it is regarding an Islamic topic (aqeedah), it involves Mawlawi, and it also involves Baba Ali Qaradaghi (بابا علي ابن شيخ عمر القرة داغي), a family friend and Islamic scholar of the Quran-focused school. I was involved with typing up the manuscript of his book Yawmul Mawti Yawmul Baa`thi (The Day of Death is the Day of Resurrection), a book that dares to challenge nearly the entirety of Islamic eschatology (the events that will happen around the time of the end of the world).

In typical Sufi fashion, his expressions of love for his sheikh Uthman Sirajuddin Naqshbandi take so many verses that one wonders what kind of force there was to drive someone to expend so much effort in expressing it.

Mawlawi explains that iman (faith in God) is either acquired through kashf (God removing the screen that hides Him from our eyes), through daleel (clues), or through taqleed (having faith because someone you love and admire has it). He has no hope of achieving the first status (of kashf), since it is only for the greatest masters, therefore what he aims at are the second (and the third, if I remember correctly).

He mentions the hadith narrations that say the Muslims will separate into 73 sects, all of which will be thrown into Hell except one, and says that he hopes that through the great and pure early and late scholars and mystics to be able to find his way into being among the firqa al-nājiya (the one group that does not get thrown into the Hellfire). See this post for the likely falseness of these narrations. A Salafi brother used this hadith as evidence to me that not being Salafi was almost certainly a surefire way of going to Hell.

At some point he starts with a tafseer (interpretation) of Surat al-Ikhlas (chapter 112 of the Quran, made up of only 4 verses), which in English can be translated as:

3. He begets not, nor was He begotten.

4. And there is nothing comparable to Him.”

He says that the fact that the chapter starts with a command (“Say”) disproves physical determinism (that humans have no free will). The existence of a command implies the possibility of both obeying and disobeying the commander, therefore humans have free will. This is a false or incomplete line of reasoning, since you can use a remote control to issue a command to a device, with the device having no choice but to obey.

In a discussion of the Night Journey of the Prophet ﷺ, he addresses those of his time who were saying the telegraph is greater than the Prophet’s journey from Mecca to Jerusalem, since telegraph is near-instantaneous:

Hey line, it is not for you to reach it, you will not
Even if like a wounded snake you coil yourself
Their difference, O sound-minded people of this age,
Is like the difference between the earth and heaven

In the first verse he is addressing a telegraph line, saying you will never reach the greatness of the Night Journey, or God’s power, or something like that. The telegraph had been in development and use in Europe for over 30 years at this time, so it makes sense that he would have heard of it. Baba Ali suggests that he may have even seen a working telegraph system.

He delves into the issue of free will versus determinism. In some verses, whose Kurdish translation is included by Qaradaghi, the Persian poet Khayyam asks the server to serve him wine, saying that God already knows he was going to do this, and this it was already written, implying that therefore he has no responsibility for the action, and therefore it is not really sinful. Khayyam is referring to Islam’s free will paradox; if an action is truly “free”, it should not be predictable. And if it is predictable, if it is already known and written, how can it be free?

Mawlawi answers the question by not answering it, in the mainstream Sunni fashion. He attacks the various theories others have put forward and concludes that the Ashaari creed is the true one (that our actions are already written, and that we are responsible for them, don’t ask why), and that we must act by the dhaahir of Shariah, do what it asks us and avoid what it prohibits us, without caring about philosophical concerns.

He talks about God’s perfection, the impossibility of any human to ever truly know and encompass Him, and ends by saying that you (the reader) is a pitiful mortal, so what business do you have worrying about such matters?

Being asked to believe in free will and predestination at the same time has always felt to me like being asked to believe in the Christian Trinity, that the Son is not the Father, and neither of whom are the Holy Spirit, but that all three are God. I have discovered a satisfactory solution to this paradox, which I call the Theory of Delegation, that satisfies the Quran and does not require one to believe in seemingly contradictory propositions. I haven’t published it due to its highly sensitive nature. I plan to read more first.

The Baghdad-based Sufi Kurdish Islamic scholar Abdul Kareem Mudarris has written a full commentary on this poem, which I found online and perhaps will read some day as a poetic introduction to the field of aqeedah.

Related articles
Dealing with Sufism making you feel arrogant and superiorImpiety by Mahwi (1836 – 1906 CE)The Unleashed Thunderbolts of Ibn Qayyim al-Jawziyya by Yasir QadhiIs it permitted to follow Sufi tariqas?The stance of mainstream Sunni Islam on Sufism: Can you be Sunni and Sufi at the same time?
« Are Muslims allowed to never marry?A Biography of Ahmad Moftizadeh »
Learn Quranic Arabic with my book!
Available in both paperback and Kindle formats.