Ahmad (transliteration: Aḥmad, Arabic: أحمد) is an Arabic name for boys that means “praiseworthy”, “praised often”.1 Ahmad is one of the names of Prophet Muhammad2 Both Muhammad and Ahmad are derived from the root ḥamd (“to praise”).3 However, it should be noted that the root ḥamd doesn’t exactly mean “praise”, its meaning has no exact equivalent in English. It means “to praise someone who deserves praise (who has praiseworthy qualities or deeds)”.

A person can be praised whether they deserve it or not. The general word for praise in Arabic is madḥ. Ḥamd is a more specific type of praise that implies the person deserves the praise, therefore Muhammad and Ahmad mean “one who is praised often because of their praiseworthy qualities.” It is said that there was none among the Arabs called Ahmad before Prophet Muhammad.4

Ahmad may also be spelled Ahmed and Ehmed.

The name Ahmad is mentioned once in the Quran:

And when Jesus son of Mary said, “O Children of Israel, I am God’s Messenger to you, confirming what preceded me of the Torah, and announcing good news of a messenger who will come after me, whose name is Ahmad.” But when he showed them the miracles, they said, “This is obvious sorcery.”5

named Ahmad, although there is disagreement about their names:

Below is the name Ahmad written in Arabic naskh script: 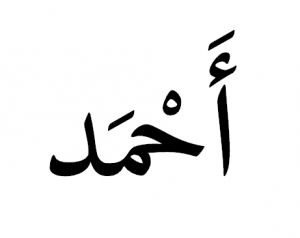 Below is the name Ahmad written in Arabic kufi script: