Ahzab (transliteration: Aḥzāb, Arabic: أحزاب) is an ancient Arabian name for boys that means “groups of people”, “parties of people”.1 Ahzab is the plural of ḥizb (“party”, “group of people”).2 Al-Ahzab is the name of surah 33 of the Quran, which refers to the large alliance of pagan tribes that laid siege to the city of Medina for 30 days in January and February of the year 627 CE. Due to its association with this event of Islamic history, the word has a negative connotation, However, there is one Companion of the Prophet Muhammad

The name Ahzab may also be written as Ahzaab.

The word Ahzab is used in a number of places in the Quran (besides being the title of a sura), as in verse 13:36:

Those to whom We gave the Scripture rejoice in what was revealed to you, while some factions reject parts of it. Say, “I am commanded to worship God, and to never associate anything with Him. To Him I invite, and to Him is my return.”

Below is the word Ahzab written in Arabic naskh script: 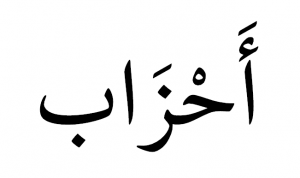 Below is the name Ahzab written in Arabic kufi script: