Akna (transliteration: ʿAknāʾ, Arabic: عكناء) is an ancient Arabian name for girls that means “one who has a bulging belly”12 It was common among ancient Arabians to give children names with negative meanings as a way of warding off the supposed harms of envious glances. However, it is possible that having a fat belly was considered a sign of health and luxury.

There is one Sahabiyyah (Companion of the Prophet Muhammad

Below is the name Akna written in Arabic naskh script: 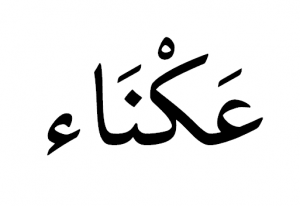 Below is the name Akna written in Arabic kufi script: