Asaas (transliteration: ʿAsʿas, Arabic: عسعس) is an ancient Arabian name for boys that means “wolf”.1 Its literal meaning is “that which comes/appears in the night”, used to refer to wolfs due to the fact that their howling is heard during the night.23 When used as a verb, the word means “it came about during the evening/night.” The verb form is used in the Quran in verse 81:17:

A call to witness the night as it falls. (Some scholars interpret the word in this verse as "it recedes". Both interpretations are possible.)4

Below is the name Asaas written in Arabic naskh script:

Below is the name Asaas written in Arabic kufi script: 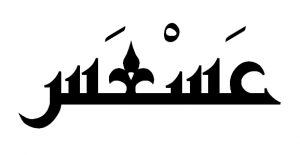