Asmar (transliteration: Asmar, Arabic: أسمر) is an Arabic name for girls that means “dark”, “tan”, “tawny”, “brown” (a light shade of brown that appears to be  caused by a sun tan) when referring to a person’s skin color. This word was used to refer to the skin color of Prophet Muhammad

.1 The Prophet’s skin color is also described as “white with a light red hue” (i.e. as in a white person’s skin color). According to Ibn al-Athir, these two different descriptions may mean that the parts of his skin exposed to the sun (such as his face) had a tanned color, while the parts not usually exposed (such as his shoulders) were white.2

Asmar is also spelled as Asmer.

Asmar was originally a boy name, but today it is more common to use it for girls. There are two (male) Companions of the Prophet Muhammad

Below is the name Asmar written in Arabic naskh script: 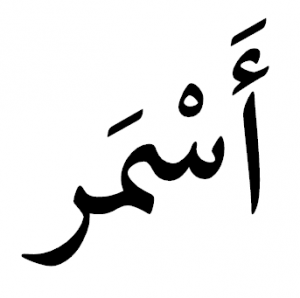 Below is the name Asmar written in Arabic kufi script: 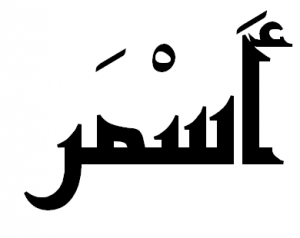