Bareera (transliteration: Barīra, Arabic: بريرة) is an Arabic name for girls that means “one fruit of the arāk tree”. The arāk tree (scientific name Salvadora persica) is the tree from which the Arabian toothbrush, the miswāk, is made.1 The literal meaning of Bareera is “faithful”, “loyal”, “dutiful”, “devoted to good deeds and worship”, from root birr (“dutifulness”, “faithfulness”, “the doing of good deeds”.2 The ancient Arabians, when using this name, had the fruit of the arak tree in mind, rather than the literal meaning.3

Below is the name Bareera written in Arabic naskh script: 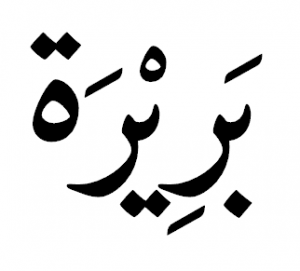 Below is the name Bareera written in Arabic kufi script: 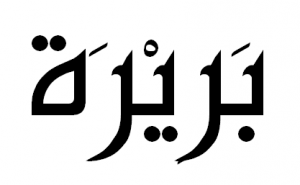