Below is a chart (click it to zoom) that shows the seasonality of Anglo-American history since the end of the Middle Ages, according to the Strauss-Howe Generational Theory (as described in their 1997 book The Fourth Turning). Click here to download an enlarged version. 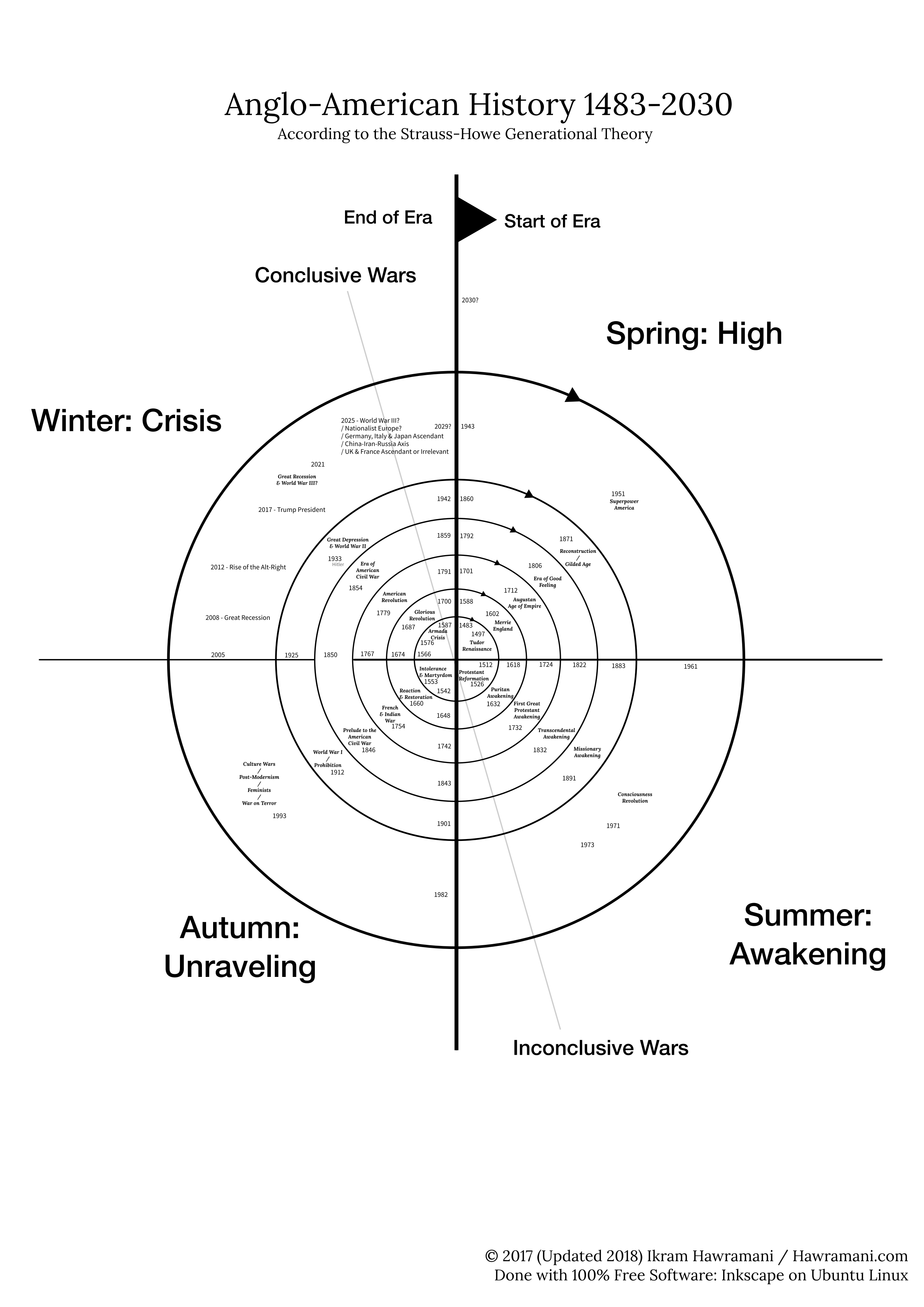 Below is the inner circles zoomed in (for those who don’t want to click the above chart to zoom in): 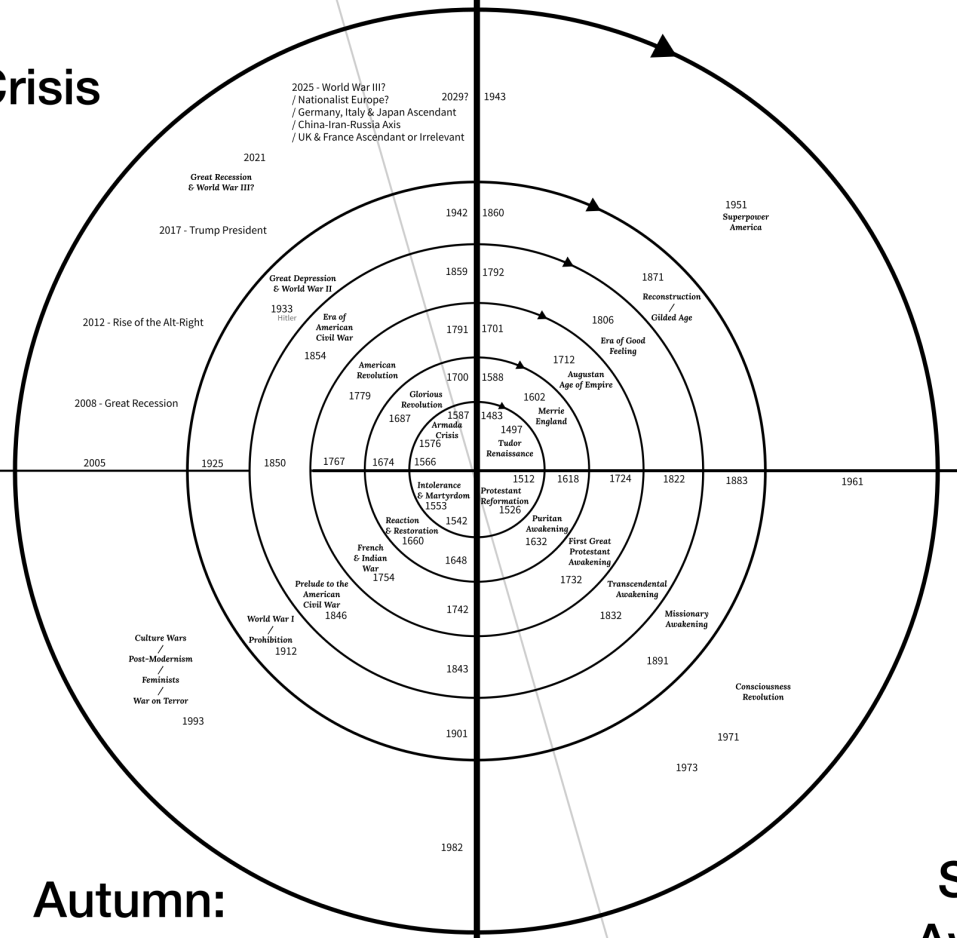 The “saeculum” is the word that Strauss-Howe use for each circle of the chart above, four seasons together make one saeculum. A saeculum is generally the length of one human life time, and its regularity has been noted since ancient times. We are currently living at the end of the saeculum that started in 1943, and which will probably end sometime between 2025 and 2035.

Below is the part of the chart that is most relevant to 2017. Many world leaders feel that we are approaching a major war. Countries are preparing for war, with Russia and China at the forefront, and Japan starting its own re-militarization program. According to the Strauss-Howe theory, 2017 is equivalent to 1933 (when Hitler got in charge and started rebuilding Germany’s army), 1854 (when the prospect of an American Civil War felt more and more imminent), and 1779 (the middle of the American Revolutionary War against Britain, and the year of the French Revolution). Needless to say, right now we are living in very interesting times. 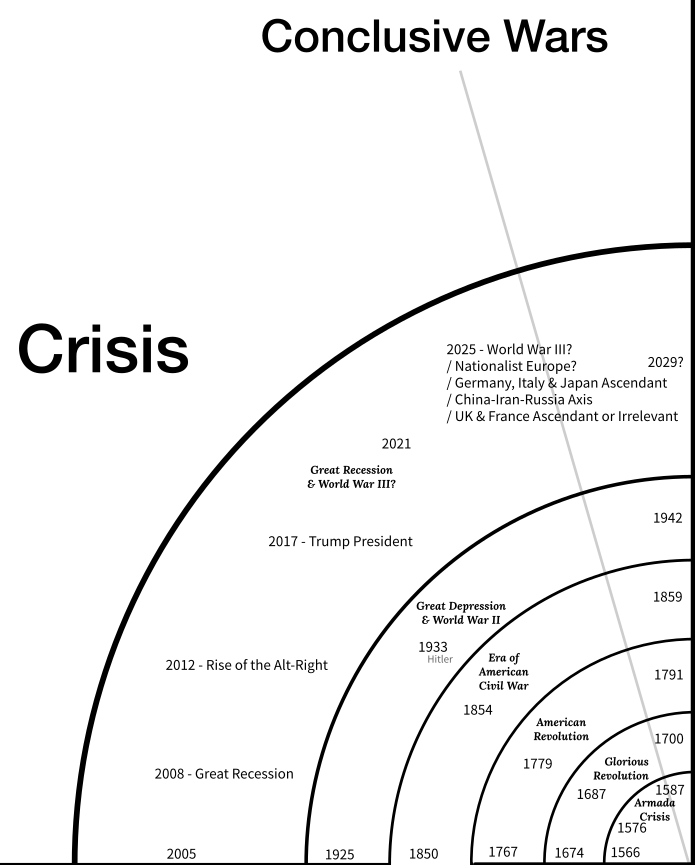 [I updated these charts in 2018.]
Related articles
Failing empire barksMeasuring Economic and Military Potentials of World Nations with the Human Genetic-Cultural Quality Index (HQI)AWS Storage Historical Pricing and Future ProjectionsWhen will the average flagship smartphone have a 5000 mAh battery? Probably around 2029What happened to Islamic civilization? Why did Muslims fall behind in science and technology?Forecasting the World’s Top 50 Most Powerful Countries in 2035 Using the HQI
« Fixing jagged/aliased text on KDP/createSpace paperback coversRecovering from a SAXParseException error with no data loss »
Learn Quranic Arabic with my book!
Available in both paperback and Kindle formats.

Excellent chart, well done. It’s going to be interesting seeing how well the future holds up to the Strauss-Howe theory. So far, it seems to be on track. I found your blog by searching to see whether anyone has tried to apply the theory to societies other than Anglo-America, and in particular whether they have done so for China. My first impression is that China might be synchronised, or nearly so, with the west. The Cultural Revolution, for instance, might be seen as an Awakening, comparable with that occurring in the west–except that it was initiated from above rather than bubbling up from among the youth. Or perhaps the 1940s and 1950s were the Awakening, as the ideological Maoists took over the country. My gut feeling–I don’t know why–is that Xi looks like a Nomad, and this would fit with him being born in the early 50s during an Awakening. Then what about other societies? In Iran, the overthrow of the Shah, ushering in a religious revolution, might seem to be an Awakening, providing an anchor for the Iranian cycle, which would lag a little behind the west. Do you have any thoughts on all this?

A cycle of weakening and strengthening Christian belief seems to have been essential to the turnings the theory covers. The 60’s should have seen a strengthening of belief but instead Christianity was abandoned for other ideologies. I do not know if the idea of the turnings can be transferred to other countries because it requires a relatively reliable set of reactions that each generation has to the previous ones. While in the Anglosphere four generations make a cycle, in a different sphere it might be three or five. These are just some random considerations I can think of.