As part of my series of posts comparing the scientific output per capita of different countries, in this post I will compare Malaysia and China. Malaysia is interesting for being the most industrialized Muslim-majority country in the world. It took China until 2001 to reach Malaysia’s scientific output per capita levels for 1996, meaning that China was five years behind Malaysia on this measure of scientific output. By 2005, the two countries were producing the same amount of scientific research per citizen. Then the gap started widening, so that it took until 2011 for China to reach Malaysia’s output levels for 2008. But even by 2017, China had not caught up to Malaysia’s 2009 output levels. Today Malaysia is producing almost three times as much scientific research per citizen than China is. I expect China to remain firmly 10 years or more behind Malaysia for the foreseeable future due to the time and energy costs of scaling scientific research output over the vast swaths of China, but China will likely ultimately catch up with Malaysia some day.

Note that China was producing 16 times as much scientific research as Malaysia in 2017, what we are comparing here is output per citizen, which tells us the entire country’s general state of development. Since China has highly undeveloped rural areas with hundreds of millions of citizens, those are going to seriously drag down its output per citizen until those areas are finally industrialized. 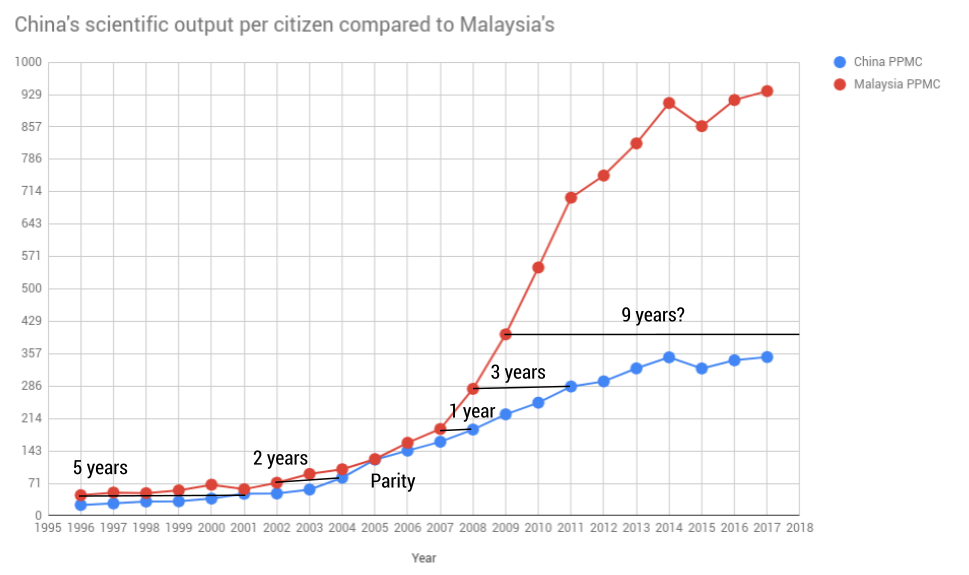