It has been said that China is twenty years behind South Korea in development, and that South Korea is or was twenty years behind Japan. A measure of development that I like to use for comparing the development level of different countries is PPMC, which stands for Papers Published Per Million Citizens, referring to the number of scientific and scholarly papers a country publishes per a million citizens in a year. In 2017, that number was 1491 for South Korea while it was 349 for China, meaning that South Korea produced more than four times more scientific research per capita than China, which means that South Korea’s infrastructure, institutions and educational attainment on average are four times more advanced than China’s. The reason for this is that besides the fact that China started industrializing later than South Korea, China is a much larger country and requires far more investment and work to where South Korea is. China’s coastal cities likely already far outpace South Korea technologically, but China’s interior is going to be dragging down the country’s averages for decades to come. 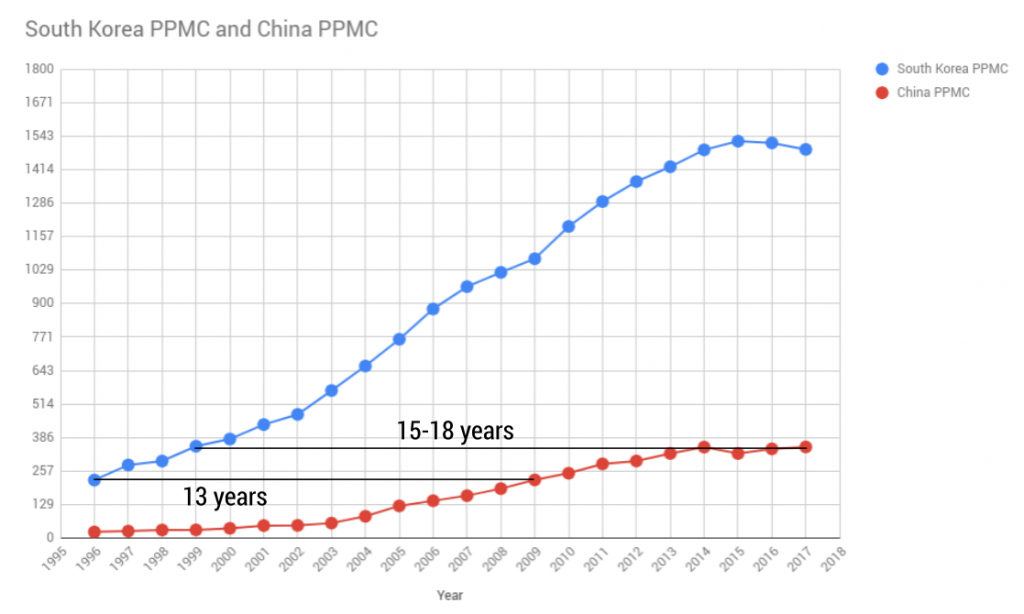 It is natural for this gap to grow with time because due to China’s much larger size, it is going to take it far more time to raise the country’s scientific production compared to the much smaller South Korea. The good news for China is that this gap is probably not going to be getting much larger because South Korea’s output has started falling (likely due to an aging population, i.e. fewer young people available to become scientists and scholars) while China’s continues to rise.