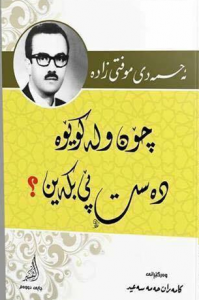 Chon u La Kwewa Dast Pe Bkain (“How and From Where Do We Begin?”) is a 170-page Kurdish book based on interviews with Ahmad Moftizadeh done after he was released from prison (and soon before his death) and perhaps some of his writings.

It provides an overview of his thinking processes regarding various matters, especially the proper form of conduct for those who want to emulate his way. The information is often scattered and no formal approach program or vision is presented. Moftizadeh’s approach has generally been like the Prophet’s ﷺ, offering guidance as situations presented themselves, rather than sitting down to build systems for people to follow.

On the question of political work, he offers some guidance on the issues that his own movement had, without doing a formal analysis, and saying that different people at different times and places can reach their own conclusions regarding the best modes of action when doing Islamic political work. He strongly criticizes the political partisanship practiced by so many Islamist groups. In his view (and mine, too) matters of the heart take precedence, so that a Muslim who uses partisan thinking to attack another Muslim has automatically lost the way of wisdom. He also mentions that a key source of corruption within Islamic movements is when individuals seek power within the movement.

My key discovery regarding political Islam has been that Islamic movements must never seek power. His ideas are close to this, and his movement (Maktab Quran) does not seek power, but he does not clearly state it. In his thinking, it is apparent that he hasn’t arrived at this conclusion, thinking that at certain times and places, once a certain stage of growth has been reached, groups of Muslim can engage in political partying and do more good than harm.

He mentions that one of the biggest proofs the truth of Prophet Muhammad’s prophethood ﷺ is that his wife believed in him immediately. A wife knows her husband of many years better than most people. She knows his weaknesses and flaws. If she had known him to be untrustworthy, or known him to have significant flaws, she wouldn’t have supported him in bringing about a new ideology that totally opposed her culture.

And after her, his closest friends also believed in him quickly, even though he didn’t have any proof to offer them except a few verses of the Quran. Again, this shows the immense amount of trust these people had in him.

He is asked about his opinion on certain luminaries of the 20th century Islamic revival, such as Maududi and Qutb, and is asked why he does not refer to them often, and is asked whether he somehow disapproves of them or dislikes them like some people have suggested.

He says that loves Qutb’s message and considers him far greater than himself, and mentions a few lines of poetry he had written in which the word “Qutb” is used both metaphorically and as a reference to Sayyid Qutb.

He says that he does not have a very good memory for crediting ideas and sayings to their authors, so that he uses what he has learned from these men without saying it is from them. He also says that due to his business with social and political work throughout his active (pre-prison) life, that he did not have time to read too much, often taking ideas from other people.

A large part of the book is dedicated to clarifying the concept of tazkiyah (which could be translated as “spiritual cultivation”), which in Moftizadeh’s view takes precedence over instruction. Instruction is merely the the transfer of information from a person to another, while in Moftizadeh’s view, Islamic education should focus on tazkiyah, imparting on people a subconscious appreciation for Islamic manners and ways of thinking. Instruction is the transfer of information, tazkiyah is the transfer of character, and far more important.

He does his best to clarify what he has in mind regarding the difference between tazkiyah and mere instruction, using the example of Prophet Muhammad. To perform tazkiyah is to provide for people the subtle guidance and encouragement for them to become spiritually uplifted. To merely instruct people, the way it is done in various Islamic education systems, without focusing on imparting character, is going to do little good and has little affinity to the Prophet’s method of instruction.

A large part of Moftizadeh’s thinking regarding Islamic education is to discredit the classical system that taught various technical topics without giving a thought to the cultivation of character, creating insincere clerics who did their Islamic work as a job without their hearts and souls being in it, and causing people to consider Islam something irrelevant to their daily lives, similar to government.

He is also equally critical of Sufis who cut themselves off from society and allowed Islam’s highly dynamic, highly activist message to be lost.

Moftizadeh and I agree on considering Islam an activist movement rather than just a religion, and I think he would agree with this principle of mine:

No Muslim's faith is complete if he or she is not an anti-poverty activist.

To me any Muslim leader who is not seriously worrying about and planning against poverty is either a hypocrite or a highly ignorant person, and in both cases is not worth following (he may, of course, have useful technical knowledge.)

One of Moftizadeh’s key teachings is that a crucial part of spiritually uplifting others (whether those others are religious or not) is to treat everyone with kindness (mehrabani) and love, and to joke with people and talk to them in a way that reaches them (one would call it “building rapport” today).

Talking about “reaching people” is quickly misinterpreted by many (Muslims and non-Muslims) as a way for advocating for clever manipulation tactics for converting people to Islam.

There are two types of dawa (“inviting people to Islam”). One of them spends time and money on increasing the number of Muslims, and creates semi-missionaries who encourage people to embrace Islam using various tactics. The other type of dawa is to embody Islam, to live the Quran.

To me religion is a very personal thing, and any effort to connect with the hearts of other people with an aim in mind (to make them Muslim) is automatically dishonest.

To me, and more or less to Sayyid Qutb, Moftizadeh, and Tariq Ramadan , our mission is to love and to be kind, to do good in this world, to help people find a better way when they are stuck one way or another, without ever having the goal of turning them into one thing or another, treating their dignity and privacy with the utmost respect.

Religion and spirituality is a very personal matter, and it is highly disrespectful (not to mention awkward, and futile) to barge into people’s lives and try to convert them.

Proper dawa is goal-less. You do not make someone your “project” and try to finish this project by converting them. You, instead, treat everyone with love, kindness and empathy, while also embodying the rest of Islam in your daily life. Our interactions with non-Muslims must never be on the basis of hopefully one day converting them to Islam, this always leads to short-term minded, power-seeking behavior. Any kindness and empathy we show them must be given freely, selflessly, without expecting anything in return, and this means without expecting any return of the favor, or any added friendliness from them toward us and our religion.

We practice Islam and in this way show people what it is. They can take it or leave it.

I also feel that any money spent on converting non-Muslims to Islam is far better spent on eliminating poverty and educating those who are already Muslim, and especially new converts. In my view anyone who converts to Islam should automatically be given a monthly zakat stipend by their local mosque (if they are not wealthy), to make them feel like they belong to a community that cares about their well-being.