So, I am someone who likes using logic and I have defended Islam and my Muslim-ness many times from criticisms, some well-founded, others not so much. How can I defend Mohammad's marriage to a young girl? He was old at the time. I can't imagine being a child and being given away to an older man. Why did he think that was okay? How do you defend that without sounding like a pedophile apologist? -It is an honest question. How do other Muslims deal with this and remain moral?

The matter at issue with Aisha’s age is the validity of the hadith literature. An admission that Aisha’s age at marriage may have been different from 9 would shake the foundations of hadith science since it would imply that there are false statements in Sahih Bukhari and Muslim, therefore the majority of traditionalist scholars are unwilling to go that route. From what I have seen, using traditional methodology, the evidence in support of Aisha being 9 stronger than the evidence against it. Unfortunately I cannot find any source that researches this issue in an unbiased manner; they are either angrily defending the “honor” of al-Bukhari and Muslim (the traditionalist sources), or they mix weak and strong arguments, bad research and a disrespectful attitude toward the scholarly community in supporting a different age.

A minority of prominent modern scholars, such as Ali Gomaa (Egypt’s Grand Mufti from 2003 to 2013) and Taha Jabir Alalwani (an Iraqi scholar who teaches in the United States) believe that Aisha was “in her late teens” at the time of the consummation of her marriage (mentioned in Misquoting Muhammad by Jonathan Brown). So the matter is not very cut-and-dry. The most prominent authority for Aisha’s age is Hisham bin Urwa (her nephew). But this same person is quoted in al-Dhahabi’s Siyar Aʿlām al-Nubalāʾ as saying that Aisha died at the age of 67 in the year 672, which would logically mean she was born around the year 605. Since her marriage was consummated in or around 622, that would make her 17 at the time of consummation.

Before her marriage to the Prophet, there is mention in authentic sources of Abu Bakr having promised to marry off Aisha to a pagan man (Jubayr bin Mutam bin Adi). This promise must have been made before Islam, because it is highly unlikely that Abu Bakr would promise a pagan his daughter after he became Muslim himself. This means that, even if the promise was made when Aisha was an infant, it would have been made on or before 610 CE (the year of revelation), making her at least 12 in 622 CE when her marriage with the Prophet

was consummated. 12 is not much “better” than 9, but the point is that this conflict with the official narrative is sufficient to throw doubt on the whole story. And if we assume she was bigger than an infant, perhaps 3, at the time of the promise, then that would make her 15 in 622 CE at the time of the consummation of her marriage with the Prophet 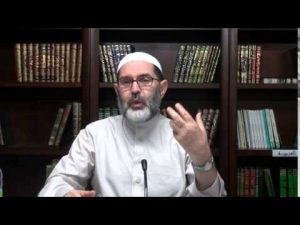 The Syrian hadith scholar Dr. Salah al-Din al-Idlibi, he has taught as a professor at al-Qarawiyyin University in Morocco, Imam Muhammad bin Saud University in Riyadh, College of Islamic and Arabic Studies in Dubai and al-Makkah al-Maftuha University in Jeddah.

Professor Salah al-Din al-Idlibi is the fairest-minded voice on this issue that I have found. He is a not a liberal Muslim who dismisses tradition, he is a hadith expert who works within the tradition and concludes in a 2018 paper that it is most likely Aisha was born about 4 years before the Revelation, making her close to 18 at the time of the consummation of her marriage near the end of the first year of the hijra.1 See my translation of his paper below:

Another aspect of Aisha’s age is that, due to the Hypocrites in Medina, and later some of Shia, claiming that she was unchaste, there was a strong incentive for Muslims to give preference to any evidence that suggested she was extremely young at the time of her marriage while dismissing evidence against it. They did not necessarily fabricate evidence, but it is possible that there were authentic hadith narrations that supported a different age but that were not written down by the hadith scholars in their hadith collections because they preferred the age of 9. We know that hadith scholars refused to write down narrations they considered “absurd”, even if their chain was authentic. (See Jonathan A.C. Brown, “The Rules of Matn Criticism: There Are No Rules.”)

And God knows best.
Asking questions is temporarily unavailable. Sorry for the inconvenience.
Related articles
How and From Where Do We Begin? By Ahmad MoftizadehA Study of the Hadiths on Qadar (Predestination): Judging Between Fatalism and Free WillA study of “the majority of people in Hell are women” hadithProbablistic Hadith Verification: Combining the Science of Hadith with Legal TheoryDealing with sexist hadith narrations as a womanIslam and magic
« Will God forgive your sins?Being a Muslim and a tomboy »
Learn Quranic Arabic with my book!
Available in both paperback and Kindle formats.