The following chart from a BBC article (archived link) shows how home prices in the UK increased much faster than wages between 1975 and 2005. 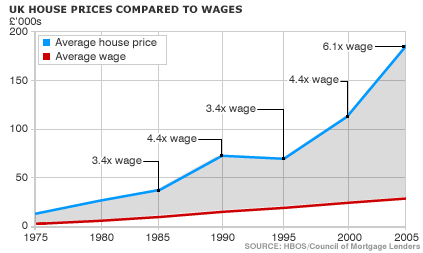 If you ask “Why are wages not increasing fast as home prices?” you are asking the wrong question. What we are seeing above is a literal land grab enabled by what our ancestors called usury. Due to the way that the profits of finance always outrun the profits of the ordinary economy, the wealth of financiers (lenders) grows faster than the wealth of the rest of the economy. In order to reinvest their fast-accumulating wealth, they buy houses and rent them out. They become a major player in the house-buying market, and their fast-increasing wealth, which always outpaces wage growth, enables them to bid up home prices. What we see above is simply a reflection of how usury causes wealth to accumulate in the hands of the lenders. Below is a chart from an essay of mine that illustrates the way wealth accumulates in the hands of lenders over a 100-year period: 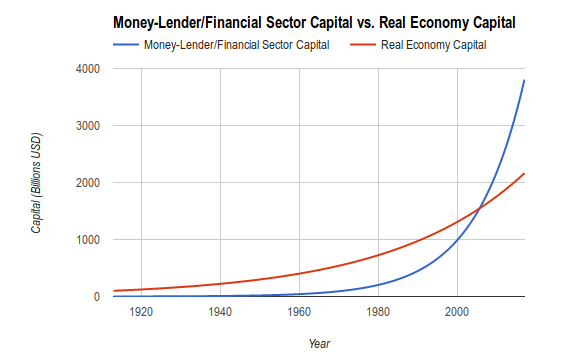 I can now state Hawramani’s law of home prices in usurious economies:

In an economy largely controlled by lenders, house prices do not reflect supply and demand, they reflect the increased accumulation of wealth in the hands of the lenders as they bid up home prices in their efforts to reinvest their ever-increasing wealth.

To put it another way, house prices track wealth inequality (wealth accumulation in the hands of the lenders) more than they track supply and demand.

The collapse in fertility rates in industrialized nations has a number of reasons and economics is an important part of it. In countries that have experienced heavy immigration the effects of low fertility rates have been masked since the population continues to be replenished by foreigners. But in countries like Portugal and Japan where immigration has been negligible, the effects are everywhere. Portugal’s population decreased by over 300,000 between 2009 and 2015, which is an important decrease for a small country. Japan’s population is expected to decrease by a third by 2065. Japan’s population peaked in 2010 at 128 million. Today it has a population of about 126.7 million, meaning that it lost 1.3 million during this period. The most visible effect of population decrease is the collapse of the countryside. Villages and small towns are abandoned as the shrinking population makes it economically unfeasible for businesses to provide basic services to them.

When fertility rates go below-replacement, it usually takes 30 years for the population to start falling. This delayed effect is one of the reasons why no industrialized society has come up with an intelligent way of addressing the problem.

People’s interest in marriage and reproduction is going to be rather low when housing is unaffordable. But lenders consider housing an important playground for their wealth, therefore they bid up house prices without concern for the way it reduces fertility. However, lenders also want big populations because bigger populations means more people to burden with debt and extract interest from, and because these people will have to buy the good and services they need from the corporations that are owned largely by these same lenders.

Lenders therefore seek two mutually exclusive things: They want to control the housing (and stock) markets, and they want large populations. They cause fertility rates to collapse by subjecting the population to economic conditions they dictate, in which things continually become more expensive, but they also demand continuous population increase since a growing population is essential for growing corporate profits and growing rents.

The solution, of course, is that they lobby for immigration. Immigrants may be less productive than the native population, but they will still need to pay rent, buy groceries and get into debt through credit cards, mortgages and student loans. Regardless of what an immigrant does, at the end of the day they will be putting money into the pockets of the lenders one way or another.

Today there are hundreds of millions of people who would jump at the chance of living in a Western country. But that number is going to fall dramatically as standards of living in their own countries improve, and as their population growth slows down due to the dramatic fall in fertility rates that is happening all over the place. But for the next few decades, there will likely be ample numbers of third-world people willing to replenish the collapsing populations of industrialized nations, but the pool is going to start to shrink at some point.

Related articles
Are Muslims permitted to work in Sharia-compliant banks?The 12-Year Min-Max Average: A Simple Method for Calculating Real, Legitimate Economic Growth and Canceling Out Central Bank Manipulations and other NoiseComparing China’s scientific output to South Korea’sForecasting the World’s Top 50 Most Powerful Countries in 2035 Using the HQIAvoiding the West’s culture of usury as a MuslimMeasuring Economic and Military Potentials of World Nations with the Human Genetic-Cultural Quality Index (HQI)
« Cleaning parts of the body hit by toilet splash-backWanting to repent but not feeling repentant »
Learn Quranic Arabic with my book!
Available in both paperback and Kindle formats.