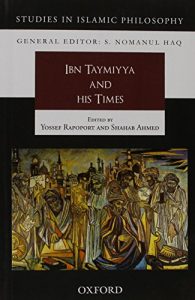 Ibn Taymiyya and His Times is a collection of high-quality scholarly essays on Ibn Taymiyya (d. 1328 CE) edited by Yossef Rapoport and Shahab Ahmed. It is highly worth reading for anyone interested in this important and controversial character of Islamic history. Maybe I should mention that I do not consider myself a follower of Ibn Taymiyya. I do like some aspects of his thinking as do many important mainstream Islamic thinkers, such as Yusuf al-Qaradawi and Yasir Qadhi.

The book is an important contribution to our understanding of Ibn Taymiyya, refuting the views of both his extremist supporters and his critics. The essay show that Ibn Taymiyya is a far more sophisticated and multi-dimensional thinker than is commonly imagined. This book will hopefully serve as a landmark in ending the simplistic, biased and prejudiced treatments that Ibn Taymiyya has so far received in both Muslim and Western sources.

The first essay by Caterina Bori shows that Ibn Taymiyya was not a representative of the Ḥanbalī school, quite the opposite. He was something of an outsider to the school and was surrounded by a very small group of highly dedicated followers.

Jon Hoover’s essay focuses on Ibn Taymiyya’s theology. Ibn Taymiyya has unique theological views that differ greatly from Ḥanbalī orthodoxy and that do not follow directly from the views of the Salaf (“Pious Predecessors”, the earliest few generations of Muslims). He argues that God’s relationship with humans is personal and dynamic. He acts directly in time and interacts with humans. This is a far more satisfying view of God to the modern mind compared to the impersonal God of more popular versions of Islamic theology.

M. Sait Özervarli’s essay continues the discussion of Ibn Taymiyya’s theology. Ibn Taymiyya, like Ibn Rushd, argues that there can never contradiction between rationality and scripture. When there is a contradiction, either scripture has been misunderstood, or the rational evidence has been misconstrued. According to Özervarli, Ibn Taymiyya argues for a Quran-centered empirical rationalism that shuns the complicated arguments of the kalam-theologians and takes its inspiration from the basic facts of life that we observe around us. According to Ibn Taymiyya there is no need for philosophical proofs of God’s existence since the Quran is full of signs that point to God. These signs are a sufficiency to those who understand them properly.

Racha el Omari’s essay focuses on Ibn Taymiyya’s polemics against Ashʿarite theology (the “orthodox” theology of scholars like al-Ghazālī and Fakhr al-Dīn al-Rāzī). Ibn Taymiyya argues for a “theology of the Salaf” that goes beyond Ḥanbalī theology and tries to always re-derive its theological views from the views of the earliest Muslims, although just how much Ibn Taymiyya’s theology agrees with that of the Salaf has to be studied further. It is seems more historically accurate to me to say that the Salaf did not really have much of a theology beyond their faith in the Quran’s literal meaning. This means that any effort to develop an intellectually satisfying theological framework will always need to go far beyond what the Salaf ever said or imagined, and Ibn Taymiyya’s theology seems to fit this description: whenever he tries to build a sophisticated argument in support of some view, he has to venture out on his own onto territory that the Salaf never explored. For this reason he was criticized by other Ḥanbalīs for engaging in too much philosophical thinking.

The essay by Walid A. Saleh examines Ibn Taymiyya’s approach to interpreting the Quran as it is laid out in his short treatise Muqaddima fī uṣūl al-tafsīr (An Introduction on the Foundations of Quranic Exgesis). Saleh calls Ibn Taymiyya’s approach “radical hermeneutics” since it attempts to throw away the existing exegetical tradition in order to take the field back to its origins among the Salaf. It tries to force the authority of the hadith tradition and the opinions of the Salaf on the field so that no one would be allowed to interpret the Quran in any way save the way of hadith and the Salaf. Anyone who tries to put forth an interpretation of a Quranic verse will have to find a basis for it in hadith or the opinions of the Salaf. This intellectual caging of interpretive freedom is meant to ensure the “purity” of Quranic interpretations so that heretical and misguided interpretations do not enter into it. Among scholars who followed his methodology are his student Ibn Kathīr (d. 1373 CE), who continued to respect the existing exegetical tradition, and Jalāl al-Dīn al-Suyūṭī (d. 1505 CE), who according to Saleh produced the classic work of the genre of exegesis that Ibn Taymiyya called for. Modern Muslims who are not entirely happy with this restricted methodology can still benefit from sources that try to follow it, considering them one legitimate voice among others (even if such sources consider themselves the only legitimate voices).

Livnat Holtzman discusses Ibn Taymiyya and his student Ibn al-Qayyim’s theological views on human freedom and choice. Ibn Taymiyya breaks with existing views on God’s guidance to say that while all humans are born in a state of purity and guidance, a person can go on to choose what is good or evil, and according to this choice, God goes on to guide them further or misguide them. This is a refreshingly rational treatment of the question compared to the views of other scholars. There is still an important question that his theology does not answer; how can free-willed decisions be really free if they can be predicted with 100% accuracy by God beforehand? I have never read an intellectually satisfying answer from any Muslim scholar on this.

Yossef Rapoport discusses Ibn Taymiyya’s unique legal methodology, such as his rejection of accepted legal tricks that used lawful means for unlawful ends, and his breaking away with Ḥanbalī tradition in order to call for persistent ijtihād (striving to solve issues of law and theology using one’s efforts rather than merely relying on the opinions of past scholars). Intention is of primary importance to Ibn Taymiyya; even if all the proper legal forms are obeyed, if the aim is evil, he wholeheartedly rejects it. As is usual with Ibn Taymiyya, his views are in general refreshingly modern and rational.

The essay by Khaled el-Rouayheb argues that Ibn Taymiyya’s popularity in the post-classical era has been greatly exaggerated. He was a marginal figure who was rarely mentioned or taken seriously by the scholars that came after him. This state of affairs continued for five centuries after Ibn Taymiyya’s death. It wasn’t until the 19th century that a movement started to rehabilitate his image and popularize his works. The most important figures in this movement were Nuʿmān Khayr al-Dīn al-Ālūsī (d. 1899 CE) and Rashid Rida (d. 1935 CE).

Raquel M. Ukeles’ essay argues that Ibn Taymiyya’s rejection of such things as the celebration of the birthday of the Prophet Muhammad

was more sophisticated than is realized or acknowledged by his modern admirers. While he considered such things false innovations (bidaʿ, plural of bidʿa), he recommended tolerance toward its practitioners, saying that they could even get a great reward from God for their good intentions. He therefore takes a highly intelligent stance on the issue:

That is an amazingly tolerant view compared to that of some of those who today think they are representative of Ibn Taymiyya’s teachings.

The last essay is by Mona Hassan. She argues that Ibn Taymiyya’s views regarding the caliphate have been misconstrued by much of Western scholarship. Western scholars like Henri Laoust wrongly believed that Ibn Taymiyya had done away with classical scholarly view of the necessity of the existence of a ruler that followed the ideals of the Rashidun caliphs. She also discusses his fatwas regarding the permissibility of fighting the Mongols. The group that assassinated the Egyptian president Anwar Sadat in 1981 claimed that their actions were legitimate according to Ibn Taymiyya’s fatwas. Hassan says that this group completely misread Ibn Taymiyya, whose framework is actually concerned with fighting outlaws and rebels. Ironically, that extremist group itself falls within the definition of those groups that Ibn Taymiyya believes can be legitimately fought by the Muslims. She discusses Yusuf al-Qaradawi’s statements in support of peaceful political participation. Al-Qaradawi uses two of Ibn Taymiyya’s fatwas to show that Ibn Taymiyya’s was not an isolationist as some of his admirers believe but rather believed in participating in politics where this could serve a constructive purpose.

Ibn Taymiyya and His Times should interest anyone interested in a sophisticated understanding of Ibn Taymīya, Islamic intellectual history and the origins of Salafism.

Related articles
The Muslim World on the Eve of Europe’s Expansion by John J. Saunders[Book Review] Lost Enlightenment: Central Asia’s Golden Age from the Arab Conquest to Tamerlane by S. Frederick StarrMaking up fasts after repentance, missed due to lack of knowledgeIslam’s Quantum Question: Reconciling Muslim Tradition and Modern ScienceThe Last Mufti of Iranian Kurdistan (And a Critique of Political Islam)The Atonement by William Lane Craig
« Why are we supposed to control our sexual desires in Islam?The meaning of not taking Christians and Jews as allies in the Quran »
Learn Quranic Arabic with my book!
Available in both paperback and Kindle formats.

Ya Rabb
I don’t speak English but I know how difficult it is to have a good Islamic book, because where I live, not even a hijab, you can find everything online