Ijmāʿ  (“consensus”) is one of the most abused concepts in Islam, used as a weapon by many in order to claim that no one has the right to disagree with them. It helps shut down free discussion and intimidate independent Muslim thinkers into keeping silent about their views. Ijmāʾ, as it is used in scholarly rhetoric today, often means nothing more than:

By stating that there is a consensus on any issue, it is implied that those with whose opinions differ from the supposed “consensus”, meaning that they are deviants, hypocrites and unbelievers in their hearts. 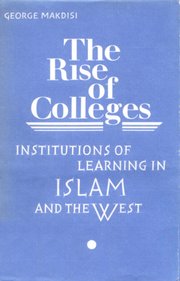 Get it on Amazon.

This is a rather sad state of things for a civilization that invented the concepts of academic freedom and the doctoral thesis (see George Makdisis The Rise of Colleges).

There is therefore a strong need for reaching, well, a consensus, on the meaning of consensus in Islam. Based on my conception of the mainstream Muslim community as a “consensual community” (see my essay Consensual Communities), I hereby define ijmāʿ as:

A consensus reached by all respected scholars belonging to a community working in full independence of conscience and seeking the truth and nothing but the truth.The presence of any form of pressure and intimidation for scholars to reach a pre-defined conclusion makes the ijmāʿ null and avoid. The presence of a single respected scholar, working independence of conscience and seeking nothing but the truth, who reaches a conclusion different from the conclusion of the majority makes the consensus null and avoid, because consensus only applies when the solution to an issue is so clear and obvious to every knowledgeable truth-seeker that not a single one of them finds a reason to disagree.

A more summarized definition is:

Ijmāʿ is nothing more or less than the autonomous concurrence of ijtihāds.

There can be different groupings of consensus. For example, there can be a consensus among the Maliki scholars on a certain issue, if all respected Maliki scholars, working independently, seeking the truth and fearing no repercussions for disagreement, reach the same conclusion in their ijtihāds on a certain question. The great 20th century Egyptian scholar Muhammad Abdullah Draz (1894 – 1958) writes:

The job of consensus is to make a ruling on a new question on morality, legislation or worship. The questions that consensus seeks to answer are subsidiary matters (furūʿ) rather than matters of belief (ʿaqīda). A Muslim does not require the authority of others to justify his own beliefs. If consensus is reached on a certain matter then that is what is desired; the external shape of the body of scholars that reached the consensus is not important. Whether they are official members of a legislative body appointed by the government, or members elected by the people to give a ruling on a specific issue. And it is not important whether those legislators are all in the same region or whether they give their rulings separately. None of this affects the value of the result they reach, provided that they reached it in the correct way. The essence of the matter is that every member should feel his own complete independence in thought and in moral responsibility and he must express his opinion freely after examining the issue from all angles. We should note that those whose opinions are sought for consensus are scholars who are experts in the questions that have been referred to them. They must also have the necessary documents and other evidence needed for making a ruling, and they must be well-versed in the history of Islamic law (fiqh), being familiar with its formation and stages of development.

Therefore consensus, in Islamic legislation, is not as some Orientalists say, is not a made up of arbitrary opinions given haphazardly. It rather represents the unity that comes from persuasion. Truth is what obligates this persuasion on enlightened minds. When scholars reach consensus on a certain question, that is due to nothing other than their going back to the Quranic texts and Prophetic traditions, striving to extract the best opinion from them. When they agree on a particular opinion after their careful evaluation of the texts, this means that this opinion is the correct one, or that it is the closest one to correctness, and based on this all Muslims adopt it.1

Another form of the abuse of consensus is to claim that since all the scholars who lived before a convenient cut-off date agreed on a certain matter, therefore disagreement on the matter is now forbidden.

Such a claim of consensus almost always encapsulates a double lie:

Beyond that, I will also argue that

The reason why the opinions of dead scholars take second place to the opinions of living scholars is because we can never be sure what factors exactly went into a dead scholar’s opinion. They may have held onto a certain opinion out of loyalty to a school of thought, out of loyalty to their teachers or friends, or out of having access to limited knowledge. Throughout history, until very recently, books were very expensive and each Islamic school of thought (madhhab) had its own libraries that largely held books from the madhhab itself, in this way limiting the access of scholars to the works of outside scholars. It is nearly always possible that a dead scholar would have changed his opinions had he had access to better research tools.

There are some people who read books by medieval Islamic scholars (say Ibn Taymiyya), and when they find that the opinions of most living scholars are different from the opinions of this dead scholar, they conclude that since the dead scholar lived so many centuries in the past, they must be closer to the truth, having opinions that are more “authentic”. The problem with this is that they ignore the opinions of the hundreds of scholars who came after Ibn Taymiyya, critiqued his opinions like they critique every scholar’s opinions and accepted some of them, improved some and rejected some. By ignoring the living Islamic scholarly tradition and jumping to some random point in history, we throw out centuries of intelligent discussion and development. A person who does this can fall into the grossest errors, unless they spend decades in research and study, only to discover at the end that the living Islamic scholarly tradition is itself the result of the same process of research and study. It is similar to rejecting modern advanced mathematics, going back to medieval mathematics as the more authentic and original mathematics, then spending decades developing those mathematics. At the end of that path a person may discover that they have wasted decades arriving at conclusions that were all easily accessible in modern books of mathematics.

Reading the books of past scholars with love and sincerity is perfectly fine. It is also perfectly fine to be skeptical of modern scholars and to compare their opinions to the opinions of past scholars. Every Muslim intellectual should be doing both of these things. What is not fine is submitting one’s independence of mind to the authority and prestige of a dead scholar, turning them into some sort of superhuman authority that cannot be critiqued or disagreed with. As Ibn Tamiyyah says:

Whoever chooses a person, whoever it may be, and constantly and steadfastly agrees with him in speech and action, then he is of: "those who have divided their religion and became sects." (The Quran, verse 30:32).

The living Islamic scholarly tradition is, or must be, a tradition of continuous and sincere critique that seeks the truth and nothing but the truth in all matters, never submitting to any authority besides Truth (which is one of the names of God).

We must all seek consensus, not through intimidation and appeals to the authority of dead scholars, but through free and independent research that seeks nothing but the truth. If scholars from around the world examine the same evidence and reach the same conclusions, freely and without being forced by one factor or another, then that is true consensus.

In this way, the Islamic scholarly tradition follows exactly the same methodology as the scientific method. In science, consensus is reached when scientists throughout the world examine the same evidence and reach the same conclusions. If two scientists examine the same evidence but reach different conclusions, then there is no consensus. Good scientists are very careful when declaring something as true, always welcoming criticism and contradicting research and theories, because that is the only way we humans, with our weaknesses and limited capacities, can be sure that we are on the right path.

Ijmāʿ, therefore, in Islam should have the exact same meaning that consensus has in science: when qualified experts examine the same evidence and reach the same conclusion, freely and without being forced, then we call that a consensus. Even if a hundred respected scientists agree on the truth of something, the presence of a single respected and qualified scientist that disagrees is sufficient to disprove the existence of consensus.

I am sure that not all Muslims will accept the above way of thinking, which may suggest that talking about consensus is futile since there can be no consensus about the concept of consensus. But my aim in writing this essay is not to convince all Muslims. My aim is to arm intelligent Muslims against these evils:

I have no desire to do what I forbid you from doing. I desire nothing but reform, as far as I can. My success lies only with God. In Him I trust, and to Him I turn. (The Quran, verse 11:88)

Related articles
On which scholar’s opinions to follow and scholarly consensus (ijmāʿ)
« The Muslim view of OrientalistsCan one unknowingly associate partners with God? »
Learn Quranic Arabic with my book!
Available in both paperback and Kindle formats.