The Scimago Journal & Country Rank is one of the things I look forward to most to seeing every year. The rankings show each country’s scientific output, a very important measure of a country’s present level of development and its speed of development. The biggest surprise in the 2017 rankings was from Indonesia, whose cited paper count jumped from 11,765 in 2016 to 18,683 in 2017: 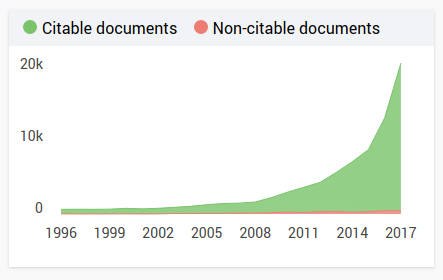 Indonesia has been a great laggard in scientific output due to its lack of development. Its papers per million capita (PPMC) is 71 compared to Malaysia’s 925. Only 16 years before 2017, in 2002, Malaysia’s PPMC was 72, comparable to Indonesia today. If Indonesia follows the same development trajectory as Malaysia (the way South Korea followed Japan), by 2032 Indonesia will be one of the world’s top scientific powerhouses. Due to Indonesia’s vastness compared to Malaysia, their development will likely take longer; however, the availability of newer and cheaper technologies may speed development up so that they end up following Malaysia’s trajectory despite their handicaps.

If Indonesia ever catches up to Malaysia’s present level of scientific output, it would be publishing 241,000 papers per year, making it the world’s third largest science hub after the US and China.

Almost all of the world’s countries are seeing a great increase in scientific output, caused by adopting Western methods of scientific research and publishing. Pakistan’s output doubled between 2010 and 2017. Egypt did similarly. Iran publishes more papers per capita than Russia. I believe we are in for some very interesting times.

Related articles
Science in the Islamic world grew at the fastest rate in 2018The Universal Digital Library: A Platform that Makes Digital Piracy Unnecessary, Funds Creators, and Makes eBooks, Games and Software AffordableComparing Iran’s scientific growth to South Korea’sMalaysia and Iran’s scientific growth comparedThe incredible growth of science in the Muslim world: The scientific output of Muslim countries in 2017How backward is Russia compared to Europe and the United States and when will it catch up?
« Ending technological servitude: On the need for tariffs on Internet companies (and others)A postmodern critique of postmodernism »
Learn Quranic Arabic with my book!
Available in both paperback and Kindle formats.