Question: Is it permissible for a menstruating woman to enter a mosque to attend a lecture?

said: “The mosque is not halal for a menstruating woman or for a ritually impure [junub] person.” (Narrated by Abu Dawud and Ibn Maja). There has been much debate about this hadith’s chain of narrators, as will be explained.

Some jurists also used the following verse as evidence against allowing menstruating women to enter mosques:

O you who believe! Do not approach the prayer while you are drunk, so that you know what you say; nor in a state of ritual impurity—unless you are travelling... (The Quran, verse 4:43).

Despite the fact that this verse does not specifically mention menstruation, they related it to ritual impurity.

Another group of jurists has the opinion that it is permissible for for a menstruating woman to enter mosques. This was the opinion of Imam Ahmad ibn Hanbal according to a saying of him narrated by al-Muzani, the companion of Imam al-Shafi`i. Imam Dawud and Ibn Hazm, both of whom belong to the Zahiri school of thought, also share this opinion. 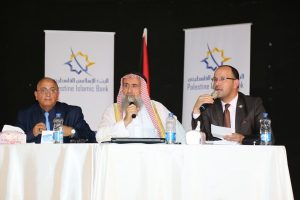 Imam Ahmad says in a different narration that it is permissible for a menstruating woman to enter a mosque if she performs ablution and is sure that she will not have any accidents. See the Insaf, volume 1, p. 347.

The hadith scholar Sheikh Nasir al-Din al-Albani preferred this opinion as mentioned in his Tamam al-Minna, p. 119. I find this view the most satisfactory, therefore my view is that it is permissible for a menstruating woman to enter a mosque to attend lectures.

The evidence for this view is as follows:

1. Original purity: The basic principle is that entering mosques is forbidden to no one. There is no clear and explicit piece of evidence that prohibits menstruating women from entering mosques. Imam al-Nawawi says: “The best that this school of thought directs one to is that the basic principle is non-prohibition. A person who says it is forbidden does not have a clear and explicit piece of evidence.” (Al-Majmu`, vol 2, p. 160)

Sheikh al-Albani says: “Our view on this question is the same as on the issue of touching the Quran in a state of ritual impurity; which is to assume purity by default, and to recognize that there is no evidence to prohibit it, as Imam Ahmad and others have said.” (Tamam al-Minna, p. 119).

2. There is a great deal of disagreement on the hadith that the majority has used as evidence, which says “The mosque is not halal for a menstruating woman or for a ritually impure [junub] person.” That is because its narrator is Aflat bin Khalifa from Jasra (?) bint Dujaja, both of whom are considered unreliable [da`eef] by many hadith scholars, such as al-Khattabi, al-Bayhaqi, Abd al-Haq al-Ishbili and Ibn Hazm. It is also related from Imam Ahmad that he considered them unreliable.

Imam al-Baghawi says: “Imam Ahmad and al-Muzani considered it permissible to stay in there [i.e. at a mosque] and Ahmad considered the hadith unsound [da`eef] because its narrator, who is Aflat bin Khalifa, is unknown [majhul] and he interpreted the verse [4:43] as referring to travelers who need to make dry ablution [tayammum] in order to pray, as has been narrated from Ibn Abbas.” (Sharh al-Sunna, vol 2., p. 46).

Al-Bayhaqi says it is not a strong [narration]."

Abd al-Haq al-Ishbili says [regarding the hadith]: "It is not proven [to be sound]." Ibn Hazm goes to an extreme, saying: "It is baseless."

The hadith has two supporting narrations [shawahid] that do not increase its soundness because their chains contain wholly unreliable narrators. (Tamam al-Minna, p. 119)

Imam al-Nawawi considers the hadith unsound in his book Khulasat al-Ahkam, where he includes this narration among the unsound narrations that relate to the issue of ritual impurity and menstruation. (Khulasat al-Ahkam, vol. 1, p. 206-210).

Al-Khattabi says: “They [referring to previous hadith scholars] considered this hadith unsound and said that its narrator Aflat is unknown, therefore the hadith is not fit to be used in evidence.” (Ma`aalim al-Sunna, vol. 1, p. 67.)

He also considered the hadith, as it is narrated in Ibn Maja’s collection, to be unsound, saying: “Its chain of narrators is unsound because Makhduj’s reliability is not verified, and Abu al-Khattab is unknown.” (Sunan Ibn Maja, vol. 1, p. 212)

Imam al-Bukhari mentions in his al-Majmu` (vol. 2, p. 160) that “Jasara has some strange narrations,” a statement that has been considered by many scholars as a judgment of unsoundness about this hadith.

Ibn Hazm considered the hadith unsound in all of its narrations, saying [regarding the narrators]: “All of this is baseless, for Aflat has little fame and his reliability is unknown,  while Makhduj’s hadiths are to be abandoned since he narrates riddles from Jasara. And Abu l-Khattab al-Hijri is unknown, while Ataa’ bin a-Khaffat is Ataa’ bin Muslim whose hadiths are munkar [questionable]. Isma`il is unknown and Muhammad bin al-Hasan has been called a liar and Kathir bin Zayd likewise. Therefore everything in this hadith is fasle.” (Al-Muhallaa, vol. 1, p. 401)

It should however be mentioned that many scholars considered this hadith hasan [not reaching the level of soundness, but considered to be worth narrating]. See Nasb al-Raaya, vol. 1, p. 194.

3. What strengthens the opinion on permitting menstruating women to enter mosques is the general meaning of the Prophet’s saying

4. Another fact that supports permissibility is that the scholars permit non-believers to enter mosques whether male or female. A Muslim should be given preference even if ritually impure, and a Muslim woman, even if menstruating, over non-believers.

5. Another fact that supports permissibility is what al-Bukhari and Muslim narrate in the story of the black woman who used to live in a tent inside the mosque of the Prophet

In short, it is permitted for menstruating women to enter mosques seeking knowledge if they are sure not to cause the mosque to become dirty, since women have a crucial need for knowledge and learning about religion.

This is a shortened and paraphrased translation.

And God knows best.
Asking questions is temporarily unavailable. Sorry for the inconvenience.
Related articles
The Islamic ruling on women wearing perfumeIs it haram to be an actress or YouTuber?A woman’s worth does not depend on her accomplishmentsShould a wife obey a husband who doesn’t support her financially?Are women permitted to take off the hijab if necessary for work?The purpose of hijab in Islam
« Why are Muslim men so judgmental about what a woman wears?JavaScript for Complete Beginners Code Examples »
Learn Quranic Arabic with my book!
Available in both paperback and Kindle formats.