As part of my series of posts comparing the scientific output per capita of different countries, in this post I will compare Japan, South Korea and China’s scientific output per capita, meaning the number of scientific research papers published per million citizens by each country. In the late 1990’s South Korea was going through industrialization but was greatly behind Japan. South Korea’s papers published per million citizens (PPMC) was 222.8 in 1996, compared to Japan’s 681, meaning that Japan was producing almost three times as much scientific research as South Korea. As South Korea industrialized, the gap between the two countries narrowed, so that South Korea actually overtook Japan in 2007. The sad story of Japan is that it has never been able to go significantly above its 2006 scientific output levels of 942 PPMC, perhaps due to its aging population (its median age is higher by 6 years today compared to South Korea’s), and perhaps due to its stagnant economy caused by the long-term effects of interest. 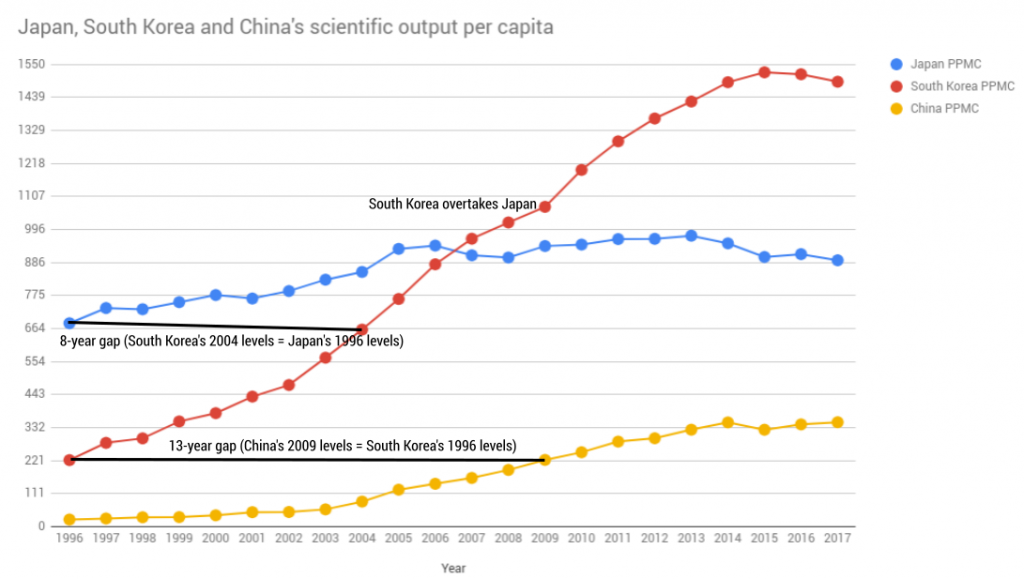 South Korea too appears to have entered the twilight zone in 2015 at a PPMC of 1523, we can probably safely assume that it will go through decades of slow decline from here on (unless immigration saves the day). China is slowly ramping up its scientific output, although it has yet to overtake South Korea’s scientific output per capita levels for the year 1999.

Adding Malaysia to the chart lead to something I hadn’t noticed before, Malaysia overtook Japan in scientific output per capita in 2016 (the green line): 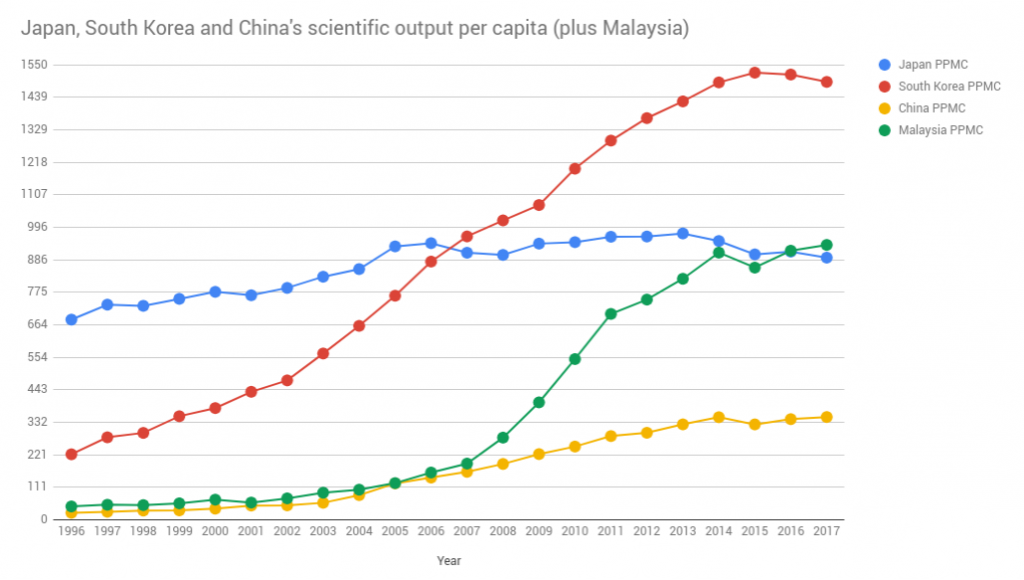 Related articles
Malaysia has overtaken Japan in scientific research output per capitaThe 12-Year Min-Max Average: A Simple Method for Calculating Real, Legitimate Economic Growth and Canceling Out Central Bank Manipulations and other NoiseScience in the Islamic world grew at the fastest rate in 2018Comparing China’s scientific output to South Korea’sIndonesia’s unlocked scientific potential?Forecasting the World’s Top 50 Most Powerful Countries in 2035 Using the HQI
« China's scientific output per capita compared to Malaysia'sMalaysia has overtaken Japan in scientific research output per capita »
Learn Quranic Arabic with my book!
Available in both paperback and Kindle formats.