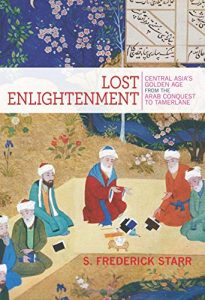 Lost Enlightenment is a highly readable overview of the history of the Persian-speaking cities of Central Asia, an area that gave Islamic civilization the majority of its great philosophers and thinkers (Jabir ibn Hayyan, al-Khwarizmi, al-Farabi, Avicenna, al-Biruni, al-Ghazali)  and many of its great scholars (such as the creators of five of the six “canonical” hadith collections: al-Bukhari, Muslim, al-Nasa’i, al-Tirmidhi and Abu Dawood, the exception being Ibn Majah who, a Persian like the rest, came from Qazvin in Western Iran).

While the book is a good source of information on Islamic civilization’s most advanced and intellectually productive area, it is marred by the writer’s secularist bias. It is often implicit in his writing that he believes the more religiously faithful a Muslim is, the less capable of rational and logical thought they are. He often spends many pages arguing that a particular thinker was actually secular and only paid lip service to Islam (Ibn Sina, Khayyam). As for the devout Muslim thinkers he covers, he often cannot hide his contempt and his belief in the person’s narrow-mindedness and falseness of conscience (as in the case of al-Ghazali).

Lost Enlightenment is also marred by various errors. The writer’s grasp of the workings of the Islamic religion and its intellectual tradition is amateurish at best (despite his merits as a historian). Starr is guilty of incredible statements like the following:

Going still further, a new governor named Nasr, ignoring the Quran’s demand that apostasy be punished by death, in 741 struck a deal with the Sogdians that abolished all punishments for those who had reverted to their former religions.

He also writes in another place:

But Ghazali branded both thinkers posthumously as heretics and therefore, according to the Quran, punishable by death.

And yet in another place:

Those who follow the philosophers were not merely heretics but, he averred apostates. The Quran quite clear states that apostates must be punished with death.

The Quran does not prescribe a punishment for apostasy anywhere in it! This is an elementary error that even an undergraduate student of Islamic studies should not make.

Starr attributes to the scientist Muhammad ibn Zakariya al-Razi a “weighty commentary” on the Quran, confusing him with Fakhr al-Din al-Razi, who was born two centuries later.

Quranic prohibitions against depicting the human form were frequently ignored...

The Quran has nothing to say on the depiction of the human form. These elementary errors about Islam’s chief scripture betray a serious ignorance of Islam as a religion, in contradistinction to the author’s wide knowledge of Central Asian history.

Starr mentions al-Hakim al-Nisaburi as a critic and challenger of al-Bukhari who caused him to be expelled from Naishapur. This means that al-Naisburi was able to go back to the time 60 years before his birth to harass al-Bukhari. It seems that Starr confused al-Naisaburi with al-Dhuhali, who fits Starr’s descriptions. Al-Hakim al-Naisaburi was actually a champion of al-Bukhari, critical to the canonization process of al-Bukhari’s hadith collection, as is covered in detail in Jonathan Brown’s The Canonization of al-Bukhari and Muslim. This is all the more strange since Starr quotes Brown’s book multiple times in the pages dealing with al-Naisaburi.

Finally, some nitpicks: He says that Tus is 15 miles northeast of Nishapur. It is actually 43 miles away. He also writes:

Basra is 700 miles away from the Red Sea.

In summary, Starr’s Lost Enlightenment is a good historical overview of the period it covers. Readers should be aware of its biases and should read books by other scholars to get a more accurate understanding of the topics covered.

Related articles
Believing Women in Islam (2019) by Asma Barlas and David Raeburn FinnIslam’s Quantum Question: Reconciling Muslim Tradition and Modern ScienceThe History of Salafism: The Making of Salafism by Henri LauzièreThe Closing of the Muslim Mind and the Decline of Islamic CivilizationThe Atonement by William Lane CraigThe Last Mufti of Iranian Kurdistan (And a Critique of Political Islam)
« A History of the Arab Peoples by Albert HouraniGetting engaged Islamically without marriage »
Learn Quranic Arabic with my book!
Available in both paperback and Kindle formats.

Thank you, jazak Allah khair. Can you suggest any alternative books on the same subject and those related.