Google returns 174 million results for the search term “barack obama”, while returning 462 million results for “donald trump”. Donald Trump’s beats him by a factor of 2.65. This means that, if Google is telling the truth, Donald Trump already has more than twice as many mentions on the Internet than Barack Obama. Interesting for someone who has only been in office a little more than a month, versus eight years of media coverage for Obama’s presidency terms. 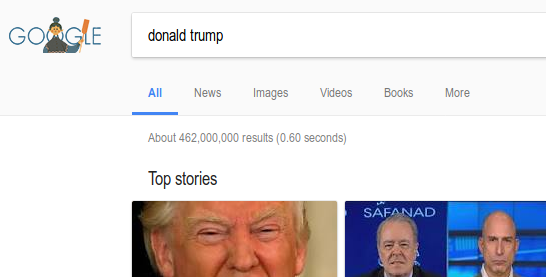 Related articles
Ending technological servitude: On the need for tariffs on Internet companies (and others)Failing empire barks
« The 12-Year Min-Max Average: A Simple Method for Calculating Real, Legitimate Economic Growth and Canceling Out Central Bank Manipulations and other NoiseMeasuring Economic and Military Potentials of World Nations with the Human Genetic-Cultural Quality Index (HQI) »
Learn Quranic Arabic with my book!
Available in both paperback and Kindle formats.