Real economic growth is different from the increase in GDP that comes from monetary expansion. The 12-year min-max method that I have come up with is a way of calculating a country’s GDP growth rate over a 12-year period that aims to cancel out “fake” growth caused by monetary expansion and boom-bust cycles by taking recent economic crashes into account. 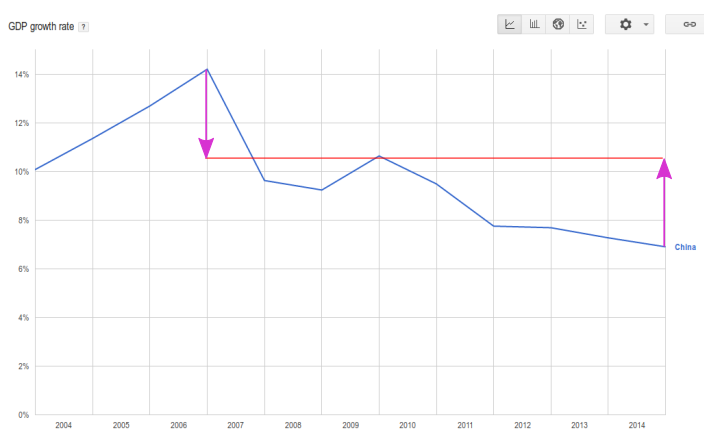 Another way of thinking of the above graph is to draw a rectangle with the country’s highest and lowest economic growth rates at opposing corners, then taking the midpoint of the height of the rectangle: 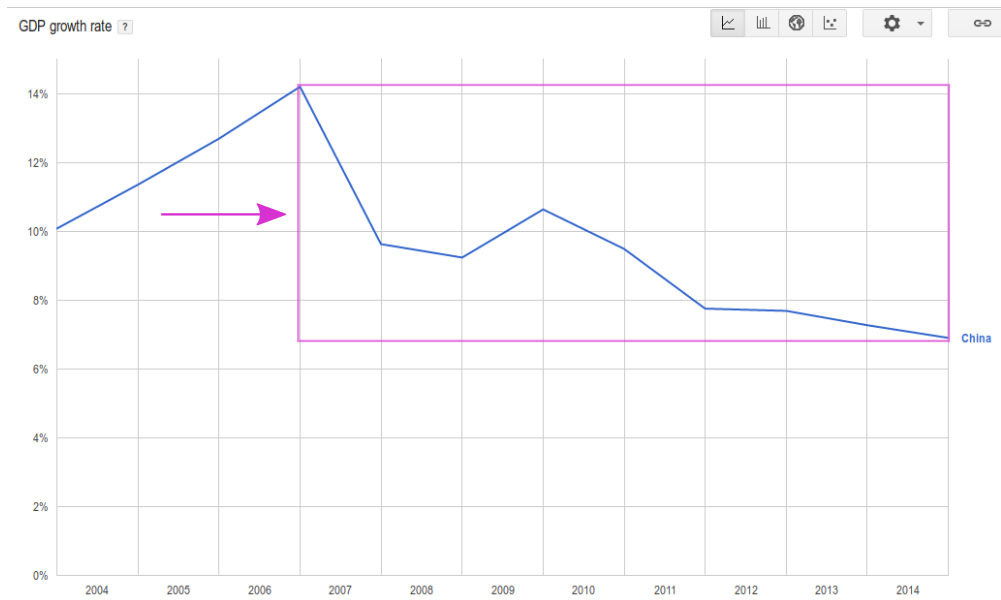 Extending the calculation to other countries, I will start with India: 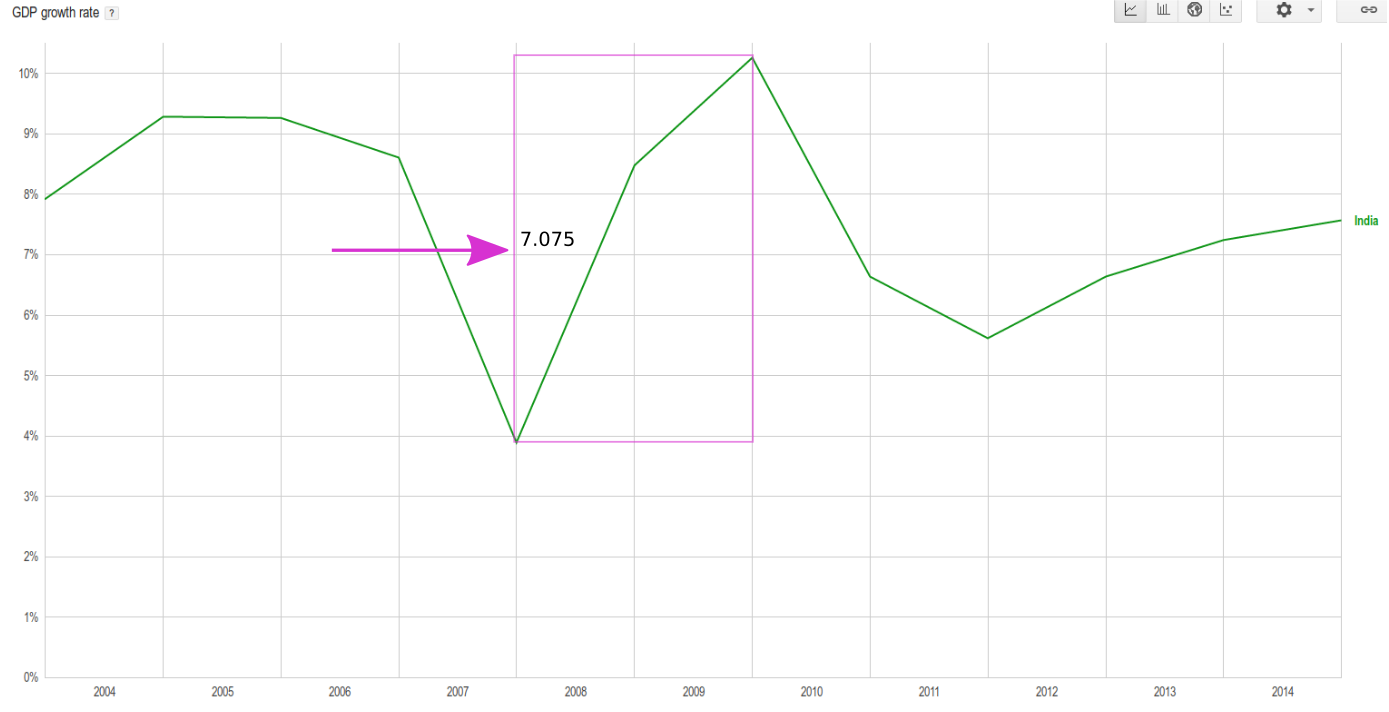 Moving on to the United State: 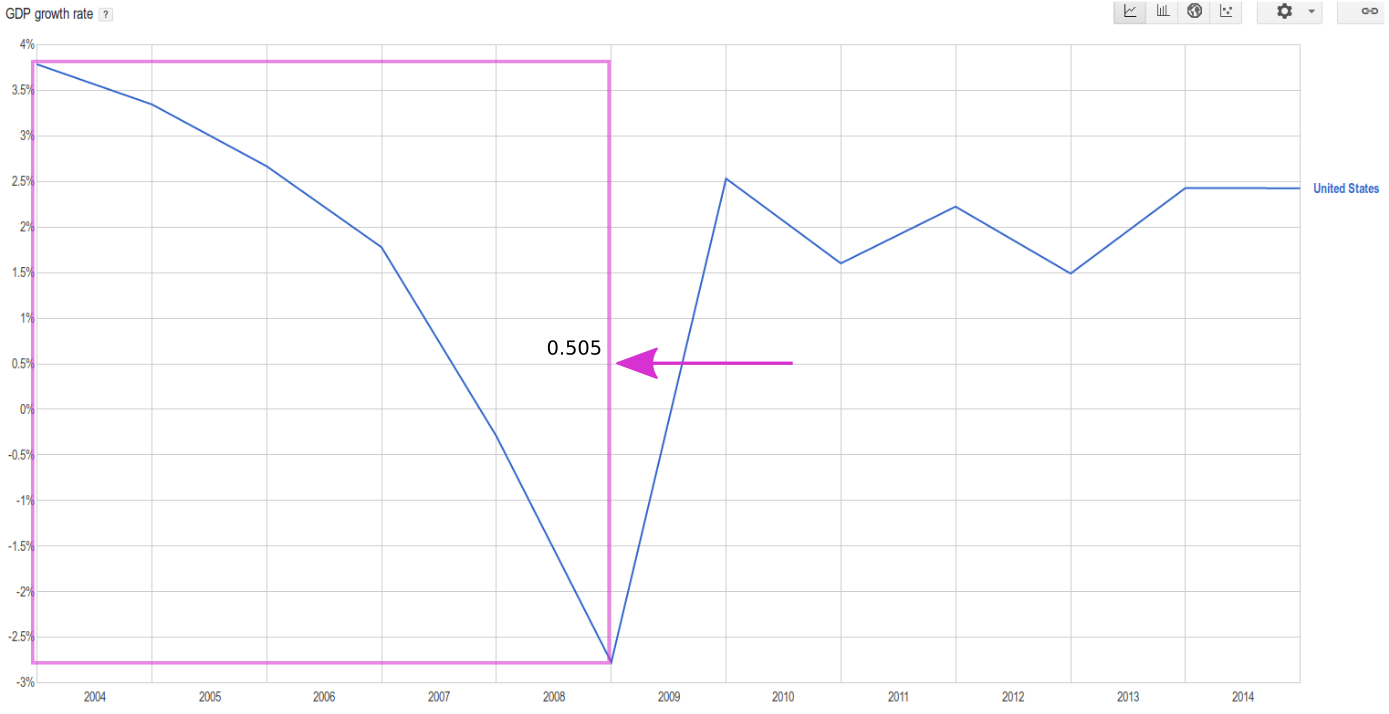 America’s highest GDP growth was in 2004, at 3.79%. Its lowest growth was in 2009, at -2.78%. Averaging the two, the result is a miserable annual growth rate of half of a percent. America’s GDP in 2004 was $12.27 trillion. According to this calculation, its real 2015 GDP was $12.97 trillion, which fits the feelings of America’s population. America’s 2015 economy was only 5% larger than its 2004 economy from an honest, Smithian point of view. During the same period, its population grew 9.77% larger, meaning the wealth or income of America’s average citizen actually fell during the period. The pie grew by 5%, the pie eaters grew by 9.77%.

Predictably, Japan is even more of a trainwreck than the United States. 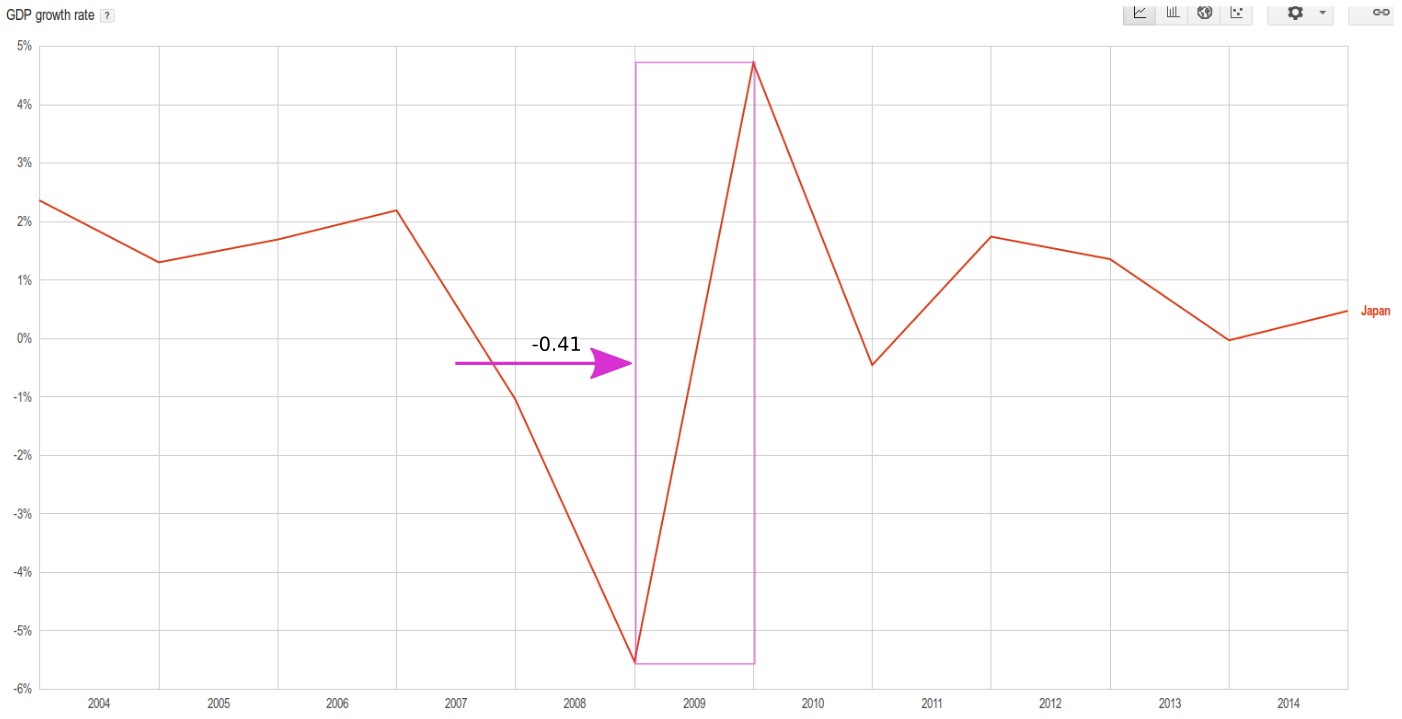 The average length of a central-bank induced asset bubble cycle is 8 years (think the late 2000 and 2008 crashes). 12 years is a cycle and a half. The 2004 to 2015 window, as an example, captures the recovery from the last crash, and our current “recovery”, providing a rich picture of what brought us here. If we look at two cycles (2000-2015 inclusive), the data will be skewed by the previous cycle’s peak, which is quite irrelevant today. If we look at only one cycle (2008-2015), we will lose historical context that is still relevant today (the period that lead to the 2008 crash).

The 12-year min-max average takes a realistic look at the “fakeness” factor within an economy and takes it out. It shows how much of an economy is a house of cards built on debt and investor euphoria, and how much of it is real and of lasting value.

The basic idea is that it measures the psychology of an economy’s participants. Crashes happen when a very large number of investors realize it wasn’t such a smart idea to buy those overpriced assets, thinking that they would be able to sell them for even higher. This moment of realization happened in 1929, 2000 and 2008.

After a crash, central banks use monetary easing to motivate investors to bid up the prices of assets. This creates a growing atmosphere of euphoria that increases spending in the economy and creates years of apparent growth. When the next crash inevitably comes, the atmosphere changes from one of euphoria to one of fear and panic. The market sobers up. In this year of sobriety, investors often underestimate the market’s worth. This acts as an antidote to the overestimation of the market during euphoric years. This is what happened in March 2009.

The momentum of an economy that’s truly expanding cannot be reversed by a financial crisis. It can slow a little, but it will continue growing, as China, India and Bangladesh’s numbers show. When we average out the years of most euphoria and least euphoria in a fast-growing economy, we still get a high rate of growth, because the growth is real, it is not entirely based on the feelings of investors.

But how does investor feeling affect GDP? The blaze of euphoria caused by monetary easing and fanned by complicit mass media makes it easier, and more likely, for businesses to borrow and expand their activities, regardless of supply-and-demand considerations. Overvalued corporations find it easy to convince lenders to give them large loans. The wealthy from around the country open their wallets and outbid each other in investing their wealth in all kinds of business activities in fear of being left behind.

In stagnant economies (where standards of living for the average citizen are no longer improving appreciably) like the those of the US, Japan and Western Europe, it is by and large the feelings of investors that drive economic expansion and recession.

One obvious difficulty with choosing only two points on a 12-year growth graph is that growth is cumulative. A 3% growth at the beginning of the period could mean a trillion dollars increase, while at the end of the period it could mean two or three trillions.

Regardless of where the low point is on the graph, it shows that it is possible, within that economy, to lose this much value. It shows that a great amount of volatility exists within the economy, so that even if in recent years the growth numbers have all been great, if there is one big crash year on the 12-year graph, it tells us that a similar crash is in the future.

The cumulative effect doesn’t take away from the idea, the idea contains it within itself. No matter how much growth we’ve had in recent years, a crash can take most of it away, as it is farther in the future, so that its percentage effect is going to be larger than the effect of the growth of the previous years.

The 12-year min-max average shows the “crashiness” of an economy. And since there is always a bigger crash in the future, measuring a country’s greatest year of growth against its worst year of growth makes a lot sense.

Honesty requires that I admit I came up with these reasonings for why the 12-year min-max average works after I had discovered it. I needed a reliable way of comparing the true economic momentums of different countries for the HQI, the Human Genetic-Cultural Quality Index that I will announce later, and among the methods I tried out, this one brilliantly fit the true states of many economies I have studied.

Below is a list of 203 sovereign states along with their real economic growth from 2004 to 2015 according to the 12-year min-max average. The countries are sorted by population.

The number I’m most skeptical of is Germany’s. Germany has appeared to grow fast in recent years. The 12-year min-max average says its growth has actually been negative 0.77% (i.e. that the next crash will wipe out all of its recent growth). This is possible, and only history will tell.

Russia gets a 0.36% growth rate. I expect its rate will be shown to be quite higher after the next crash, as it puts the 2008 crash behind, and what remains will be its recent real economic growth rate that cannot be wiped out by a crash.

Please see the fine print at the end of the table regarding certain corrections I’ve made.

No reliable annual growth data for French Polynesia. Assumed a top growth of 4.42 and a bottom growth of -4.2, as hinted at by the CIA World Factbook.

For Sierra Leone, ignored 2013 and 2015 numbers, as they were aberrations caused by the mining sector’s boom and collapse.

For Liechtenstein, top and bottom growth numbers were taken from Trading Economics as World Bank seemed inaccurate and missed the years after 2009.

Guadelope, Cook Islands, Montserrat, Netherlands Antilles, Anguilla, Martinique, Réunion, Gibraltar, American Samoa, US and British Virgin Islands, Northern Mariana Islands and French Guiana not included as GDP growth rate is not. It is possible that the World Bank counts them toward their parent states, couldn’t verify this.

Somalia is not included in the World Bank data, and other available data is none too reliable due to the fact that the country is a war zone. Decided not to include the country as no useful conclusions can be drawn from the data.

No reliable data found for Turks and Caicos Islands, Wallis and Futuna, Nauru, Mayotte, and Western Sahara, so omitted them.

Related articles
Comparing Iran’s scientific growth to South Korea’sMeasuring Economic and Military Potentials of World Nations with the Human Genetic-Cultural Quality Index (HQI)A Short Introduction to Usury: How to Make the Rich Richer, the Poor Poorer and Destroy the Middle ClassEnding technological servitude: On the need for tariffs on Internet companies (and others)Malaysia has overtaken Japan in scientific research output per capitaForecasting the World’s Top 50 Most Powerful Countries in 2035 Using the HQI
« The calm before the 2017/18 crashPresident Trump is already more than twice as famous as President Obama on the Internet »
Learn Quranic Arabic with my book!
Available in both paperback and Kindle formats.

Islam and Depression: A Survival Guide