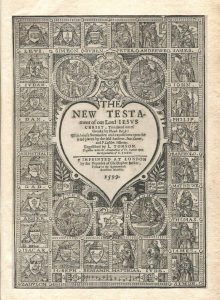 Page from a Geneva Bible dated 1599, but apparently (re?)printed a few decades later

The text was sourced from Sacred Texts. It uses modern spelling and the quoted verses are apparently from the KJV (only the notes come from a Geneva commentary).

Michael Hoffman, in his Usury in Christendom: A Mortal Sin that Was and Now is Not, made a reference to the 1599 Geneva Bible Notes as a bible commentary that forbad usury. As someone who has been studying the problem of usury on and off for years, I was interested to find and download this bible commentary for my own reading. But I soon found out that the matter is not so simple and I was led on a wild goose chase to find the version Hoffman was referring to among the dozens of versions available online. The result of my research is in the introduction of the files. 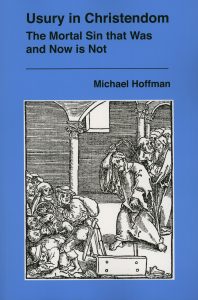 Get it on Amazon.com

To the bankers and money changers. Usury or loaning money at interest is strictly forbidden by the Bible, (Exo_22:25-27; Deu_23:19-20). Even a rate as low as one per cent interest was disallowed, (Neh_5:11). This servant had already told two lies. First he said the master was an austere or harsh man. This is a lie for the Lord is merciful and gracious. Next he called his master a thief because he reaped where he did not sow. Finally the master said to him that why did you not add insult to injury and loan the money out at interest so you could call your master a «usurer» too! If the servant had done this, his master would have been responsible for his servant's actions and guilty of usury. (Ed.)

I cannot find any information on who this “Ed.”/editor is. A website that presents the 1587 Geneva Bible also has this note on Luke 19:23, complete with “Ed.” This might refer to the editors who came after John Calvin and updated his 1560 translation with their own improvements. It could also refer to a much later editor, but the presence of this note both in a purported 1587 edition and a 1599 edition supports the hypothesis that this note was added in the late 16th century and not later.

Hoffman’s citation actually goes to a secondary source, a book called The Eighth Commandment: Thou shalt not steal by Ted Weiland (available for free online here). It appears that Weiland may have simply copied the note on Luke 19:23 from one of the many Christian websites that present it, rather than from a manuscript or print edition.

I am afraid you have been also duped, the notes you posted are for the KJV with the geneva notes and do not match the Geneva notes as the text of the KJV and Geneva are different.