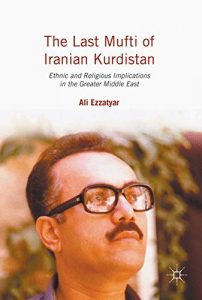 This book is a beautiful tribute to the memory of Ahmad Moftizadeh, may God have mercy on him, containing a detailed and well-supported biography of the man and detailing his works and beliefs.

As someone whose (Sunni) family spent the late 80’s and most of the 90’s in Iranian Kurdistan, Ahmad Moftizadeh and Nasir Subhani, I have been hearing the names of these two men mentioned with love for as long as I can remember.

I am thankful that such a work was done by someone with a Western background, since the quality of the research is much higher than that of Eastern publications.

On the matter of politics, the author quotes Moftizadeh as saying:

He who embarks on a political project is the most likely to lose God’s way. Just take a look at the world.

The book provides further evidence of the futility of political Islam, something I have been studying for years, beginning with my study of Sayyid Qutb. Both men belong to a class of Islamists who believed that “good and sincere” men would be the perfect men to govern a country, ignoring the fatal flaw within this hypothesis; that there is no way to reliably find “good and sincere” men, and once supposedly “good and sincere” men are selected, there is no way to reliably make them continue being good and sincere. You always end up with a limited democracy where all kinds of insincere power-seekers make it through the system and gain power. From the history provided by The Last Mufti and clues elsewhere, it appears that there were many good and sincere men among the Shia leaders of the Iranian revolution, but within ten years the revolutionary government was ruled by some of the worst criminal scum to ever walk this earth.

The critical weakness within political Islam is that for it to work, everything must go perfectly:

The conclusion I have reached at the moment is that seeking power is like seeking wealth, and that no God-fearing Muslim or group of Muslims will self-elect themselves to do it. Power corrupts and attracts the corruptible. All Islamist political activism that is aimed at seeking power (such as by winning elections) is inherently un-Islamic because the chances of it doing good are far smaller than the chances of it doing evil:

I am not against all Islamic political activism, however. The “good” form of Islamic political activism has one key attribute: It must never seek power. That is the key differentiator. We can criticize governments, we can publish exposés, we can refuse to do any evil the government apparatus asks us to do, we can try to influence politicians in a publicized manner (we must never scheme behind the scenes, as this too is a form of power-seeking, any dealings we have with politicians must be public, such as in the form of open letters, if it has to be secret, it is a way of befriending politicians and gaining power from it, and this causes it to turn into the “bad” type of political Islam), we can do everything we can to improve the world and to reduce tyranny, but none of this must include power-seeking.

This is the way of the Prophet,

, while he was under the sovereignty of another power. He spoke the truth, but he never sought power. And his activities eventually made those in power uncomfortable, until they tried to kill him. What he did was not fight back, but immigrate to a different area.

, had acted like today’s Islamists, using political organization and directly targeting Mecca’s power structure, he would have attracted the murderous attention of Mecca’s pagans far more quickly, perhaps within a few months. But by not doing this, by not being political, he was able to work for 13 years in Mecca. And once it became too dangerous for him to be there, he left for a different place.

The Prophet’s way is far more likely to be successful because:

At this moment, to me the facts that the power-seeking form of political Islam attracts insincere personalities, creates division and invites harsh persecution are sufficient to consider it a very foolish form of activism. The right way is the Prophet’s way, which is to never seek power, but to work with the people, helping them improve spiritually, while also criticizing tyranny and injustice, knowing that all power comes from God, and if the time is right, He will give it, if He wants.

In Islam, we neither seek wealth nor power. We act as if we already have these, not feeling poor or weak, but criticizing those in power bravely, because we know we are servants of the Most Rich and the Most Powerful. Like the Prophet,

, our mission is to live the Quran while not being attached to wealth or power (because by the virtue of being God’s agents, we already have these). The seeking of wealth or power has nothing to do with our mission. Our mission is to be with the people, the poor, the enslaved, the voiceless, to teach them, to help them regain some hope and courage. Like the Prophet, we deal neither with wealth nor power unless these things are freely and openly given to us, in which case we follow his example in dealing with them.

One argument in favor of political Islam that Islamists mention is that Muslims need “organization” to better arrange their affairs. I agree, but we can have all the organization we need without seeking power, therefore this does not justify Islamism.

And if they say that Islamists are needed to protect the interests of the Muslims, the examples of the past century show that Islamists expose Muslims to far more persecution, torture and murder than they would be exposed to without them, therefore no, Muslims do not need this type of poisonous favor. Islamists have shown time and again that they are completely powerless at defending the interests of Muslims. Either they and their friends get imprisoned, tortured and assassinated en masse, or they gain power only to be bombed into oblivion by the latest bully on the world stage. They can say that ideally, if everything goes perfectly, they can do much good. Yes, but things never go ideally. Ideally communism can create great happiness and equality. Realistically, communism always creates police states, purges and starvation. In the same way, realistically, Islamism always creates far more evil than good despite the best intentions of its leaders.

It should be mentioned that Maktab Quran, Moftizadeh’s movement which continues to exist today, does not seek political power. However, it continues to act as something of a party, just not a political one, and this makes it suffer some of the issues Islamist parties suffer from (causing division, attracting persecution, having limited penetration among the population). They would have done much better if they had been nothing but a group of friends with each of them acting independently, becoming leaders in their own communities, and not naming themselves anything. They continue to be highly respected and to do good deeds, as they do not suffer from one important weakness of political parties, which is the promise of power attracting toxic personalities. Their lack of power-seeking ensures that only sincere people are attracted to their group.

Better than Maktab Quran would be a movement that is not a party, but a creed, and that has no organization (or need for one). It is an intellectual movement of educated and dedicated people acting together because they all follow the same creed, similar to a colony of ants which does not have central organization, but whose each part functions in tandem with the parts closest to it. And this already exists to some degree. Throughout the world, millions of Muslim intellectuals are developing a sense of belonging to a “mainstream”, loving its leaders and doing good works in their local communities. A new creed from a new Ghazali could help give direction to them and cure the Muslim world from the misguided, power-seeking form of political Islam.

The author provides the following interesting snippet on life in modern Tehran:

During the government of Mohammad Reza Khatami, the first so-called reformist president of the Islamic Republic, the author was an intern for Iran’s premier private consulting firm in Tehran. The firm’s management was educated and or raised in the West, while the majority of its employees had similar backgrounds, or came from a segment of Iran’s middle class that was educated and relatively progressive in its values. Headscarves were promptly removed in the office, flirting was common among the young employees, and everyone but the valet sipped tea throughout the day during the month of Ramadan. Even though most of these individuals voted for reformist candidates in the Islamic Republic’s elections, they disavowed allegiance to the system, and did not believe religion should play a role in government. For them, “reformism” ideally meant reforming Iran into a modern, Western-style secular country.

Related articles
An Islamic defense of free speech (a critique of Ziauddin Sardar’s views on Rushdie’s Satanic Verses)On thinking that Muslims are ignorant and contribute little to scienceBelieving Women in Islam (2019) by Asma Barlas and David Raeburn FinnAn Introduction to the Origins of Modern Islamic TerrorismShould Islam and politics mix or not?A Biography of Ahmad Moftizadeh
« What to do if all the negative coverage of Islam and online Islam-bashing affects youThe Islamic view of watching anime and reading manga »
Learn Quranic Arabic with my book!
Available in both paperback and Kindle formats.