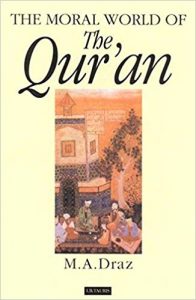 Get it on Amazon.

Dastūr al-Akhlāq fī l-Qurʾān might be one of the most important works of Islamic philosophy in the 20th century. It is a work on Quranic moral philosophy by Muhammad Abdullah Draz (1894-1958), a highly intelligent Egyptian Islamic scholar who had thoroughly studied the Western philosophical tradition. The work was originally written in French as a PhD dissertation titled La morale du Coran presented to Sorbonne University. It was translated into Arabic by Abd al-Sabur Shahin and published in 1973. The English version, titled The Moral World of the Qur’an, was published in 2008 by I. B. Tauris (Amazon link, it is absurdly expensive at the moment unfortunately).

When picking up a book by a non-Western Islamic scholar, one fears to see modes of reasoning that are centuries behind the times (as commonly seen in polemical and partisan works). Draz is an early example, perhaps one of the earliest, of an Islamic scholar who is willing to engage with the West with a thoroughly open mind, willing to take Western thinkers seriously and willing to view Islam from a Western framework. He does his best to predict attacks on his lines of reasoning and answers many possible criticism. I did not expect to learn too much from this work, being so familiar with the Quran. But I am pleased to say that some parts of it were highly enlightening.

Unfortunately both the Arabic and the English translation leave much to be desired. The Arabic translation appears to be a somewhat word-for-word translation of the French, extremely difficult to follow due to the near-complete absence of Arabic modes of expression. The English is not much better; its language feels almost as outdated as a book from 1850. 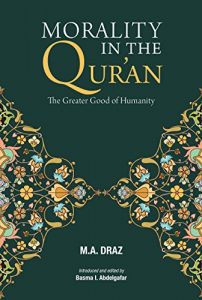 Maybe the reason is Draz’s own French writing still (his Arabic writings in his other books and articles are extremely easy to follow). What the book needs is a thorough modernization effort that does not merely translate the paragraphs but translates his thoughts into modern English.

I found the following version (published 2018) by Basma Abdelgafar titled Morality in the Qur’an: The Greater Good of Humanity and bought it from the Kindle store. It shortens the work in order to make it more accessible. While this is a very welcome effort, unfortunately it is more on the order of study notes due to its highly abridged nature, and it uses many technical words that even college graduates will likely struggle. Still, it might be the best introduction to Draz’s thought that there is.

Related articles
The Cambridge Companion to Classical Islamic Theology by Tim WinterIslam’s Quantum Question: Reconciling Muslim Tradition and Modern ScienceThe Crucible of Islam by G. W. Bowersock[Book Review] Lost Enlightenment: Central Asia’s Golden Age from the Arab Conquest to Tamerlane by S. Frederick StarrIn the Footsteps of the Prophet by Tariq RamadanIslamic Law and Jurisprudence: Studies in Honor of Farhat J. Ziadeh
« The Way of the Spiritual MuslimOrgan donation is permissible in Islam (with conditions) »
Learn Quranic Arabic with my book!
Available in both paperback and Kindle formats.