From 2007 to 2016, the iPhone’s battery grew from 1400 mAh in the first iPhone to 1960 mAh in the iPhone 7 (ignoring the new plus size iPhones). The energy density of lithium ion batteries grows at an exponential rate (5-8% a year), doubling every ten years, according to Tesla’s J.B. Straubel. The iPhone’s battery density growth is lagging this trend probably due to the continuous push for thinner phones. 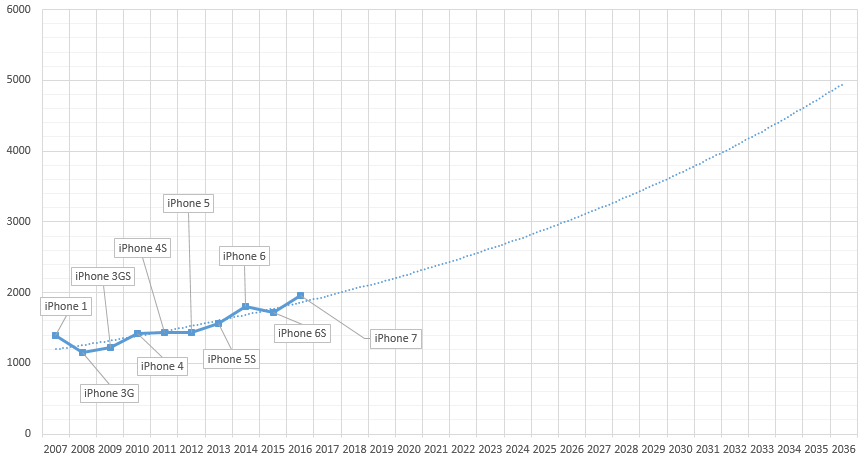 As it can be seen, around 2024 the iPhone Plus battery size reaches 4000 mAh, and around 2029 it reaches 5000 mAh. If the trend toward ever thinner phones slows, then the 5000 mAh smartphone battery might be achieved at an earlier date. I am hopeful that at least one large manufacturer is brave enough to bet on much larger batteries as a selling point, instead of following Apple’s lead in making things thinner and thinner.

Related articles
Speeding up grep of a 12.4 GB text fileThe Universal Digital Library: A Platform that Makes Digital Piracy Unnecessary, Funds Creators, and Makes eBooks, Games and Software AffordableCharting the Strauss-Howe Generational Theory in 2017On the Impossibility of 1984: Hawramani’s Theological Law of PropagandaWhat happened to Islamic civilization? Why did Muslims fall behind in science and technology?Forecasting the World’s Top 50 Most Powerful Countries in 2035 Using the HQI
« When will smartphones have 1 terabyte of storage? Probably around 2021Setting the default search path for Catfish File Search »
Learn Quranic Arabic with my book!
Available in both paperback and Kindle formats.