What I have noticed is that in Muslim countries in which there are more modest woman I get more catcalls, harassment, men following me, staring at my body parts etc. I'm not saying I'm for zina, but it feels unfair that they take out their sexual frustration on us. Maybe you're not able to relate to this, but every day I feel dirty. Even covered. Imagine people saying filthy stuff about your private parts, touching your etc. In countries where sex is more normal I haven't encountered this

Sorry to read that, and I hope it gets better for you. I am actually very familiar with this problem, having spent my teenage years in a large Middle Eastern city (Sulaimaniyyah, Iraq).

This appears to be a matter of intelligence and culture and not religion or sexual frustration. In the United States, catcalls and harassment are common in ghettos and trailer parks, where the lower class lives, even though they have as much sex as anyone else and probably more than the middle class.

Lower class people often think catcalls and harassment are fine, this has been my experience with the lower class whether in Iraq or in the United States. By “lower class” I do not mean poor, I mean those who are unintelligent, rude and uneducated and proud of the way they are. They are generally poor and live ghettos and slums, but their being lower class is not due to their poverty, it is due to low IQ and a lack of devotion to any belief system.

In the Middle East, the classes are not very well separated in general. There are market districts where everyone goes, so that the classes constantly run into each other, and this is why it is hard for someone like you to avoid the type of man you are referring to. As these countries develop, the separation of the middle class and the lower class should increase, and with it the ability to avoid lower class men.

If you want to know whether the problem is Islam or something else, compare the country you are in with a non-Muslim country that has similar average intelligence (IQ) and similar levels of development. Egypt has an average IQ of about 83, similar to the Dominican Republic and Venezuela. I doubt women will fair much better in these two countries compared to Egypt when it comes to harassment.

The people in Egypt (and in the USA) who harass and catcall are not doctors and engineers, they are uneducated. And if you look at the middle class of the USA or Egypt, they are both equally good-mannered in general. I went to one of the top schools of my country in Iraq for high school, where boys and girls were mixed. Since everyone was middle class or upper class, everyone was perfectly good-mannered, not because we had Western-style sexual freedom (we did not), but because we all came from an intelligent and good-mannered section of society.

Instead of Islam being a cause for sexual harassment, it might be acting as a great limiter on it. If these societies abandoned Islam, the problem might get much worse. In the non-Muslim African country of Botswana (70% Christian), in 2010, 92 out of 100,000 women had been raped. In the Muslim African country of Senegal, that rate was 5.6 out of 100,000 women in 2010, 16 times lower. These two countries are not exactly comparable, due to different IQs and levels of development, but this should give people, especially Christian Westerners, pause when they try to blame Islam for the Middle East’s problems. A woman in non-Muslim Botswana is 16 times more likely to get raped than in Muslim Senegal, so it logically follows that Islam might possibly be having a beneficial effect in reducing rape.

I have never met a devout Muslim male who thinks it is acceptable to harass women. One could in fact say that the problem of these Muslim countries is that they have large non-Muslim underclasses, people who are Muslim by name but do not follow it in any manner in their lives (except when it comes to arranging weddings and funerals). A devout Muslim, no matter how sexually frustrated, would never catcall a woman, because they have sufficient self-respect and empathy to know that it is against good manners and civility to do that.

If a practicing Muslim is 100 times less likely to harass women compared to a non-practicing Muslim who knows nearly nothing about Islam and does not follow it, it is only logical to conclude that practicing Islam helps reduce sexual harassment, and that abandoning Islam will almost certainly make the problem much worse. It is the underclass that has abandoned Islam in all but name in the Middle East that is largely responsible for the harassment problem.

What you could possibly do is try to avoid such people, such as by shopping at malls instead of at shopping districts. If you can get a car and stick to the middle class areas of town, then you may run into them less often.

A certain level of intelligence is necessary for a man to have sufficient empathy for women to realize that harassing them is a really nasty thing to do. For this reason in well-developed high IQ countries like Japan (non-Muslim) and Malaysia (Muslim), women are far safer from harassment compared to undeveloped low IQ countries, whether non-Muslim or Muslim, where the men, due to their lack of intellectual capacity and empathy, are more likely to act according to their animal instincts without caring about their social responsibility or the psychological trauma they inflict on women.

Below is a table that lists countries from the highest IQ (Hong Kong) to lowest. You will notice that the highest IQ countries (those on the left) are generally the countries where women enjoy the most respect. 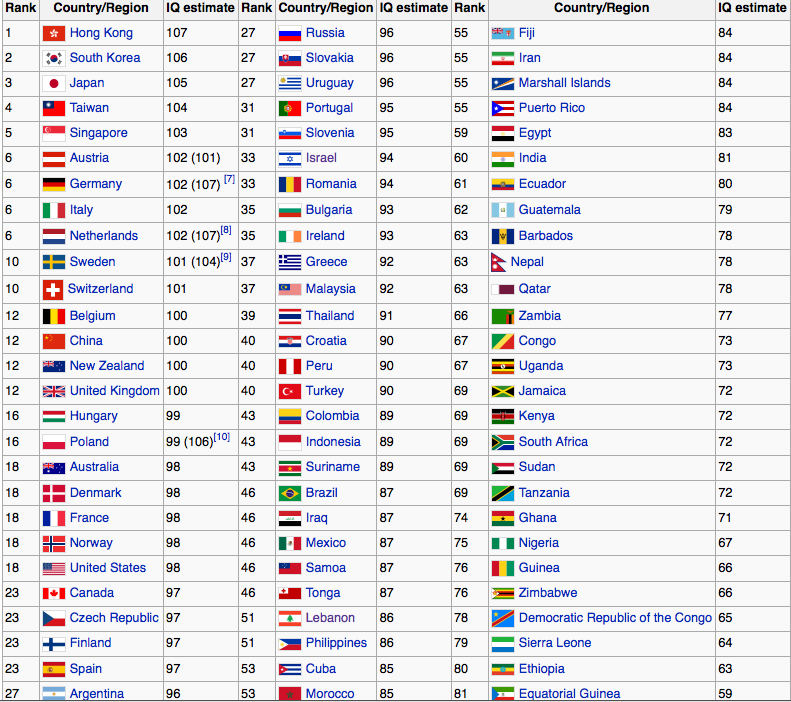 Malaysia, with its average IQ of 92, is somewhere in the middle. Women will not be as free from harassment as they would be in the Netherlands, but they would fair much better than they would if they were in Egypt or India.

IQ might be the most significant factor, but it is not the only factor that affects these things. Testosterone levels may also play an important role, and perhaps more important than all of these is cultural and religious values. A truly devout Muslim (or Christian) man is not going to harass women even if they have a low IQ and a strong desire to do so, because their religious values will help them override their animal desires.

I think sexual harrasment is more about inequality, both socially as financially. A boss or manager posesses power, in some ways, over his subordinates. That may result in harassment. That may as well be a well to do owner of a succesfull Enterprise (higher class) or a less well off guy in a country that treats women inferior to men (so basically countries that have developped less, both socially and technologically).
I think sexual harrassment in higher classes is less visible and more subtle but not less damaging. Appearances can be very deceiving. In the West the problem has to do more with declining morality and respect for women such as wide access to pornography (although also accesible in the rest of the world of course), exposing women as ‘whores’ (whenever they dress immodestly, this is especially a problem concerning mostly Muslim youngsters, who, as you said ‘identify as Muslim’ but act as if they are not) So there are new ways being discovered that can lead to sexual harrassment.
Also shaming and taboo are various elements which may result in a woman will/will not report sexual harassment. Less developped countries tend to have a negative view on the rights of women and will be less accomodading to write down a report or take a complaint seriously.
As for India: it is a society based on the ‘caste-system’ where in-equality is presumably still very prevalent, providing lesser protection and rights to those of a lowly social stratos.
Statistically, rape numbers (so not ‘sexual harassment) are higher in Western countries than elsewhere but this may also have to do with not or underreporting in other countries or the implementation of the law (concerning what constitutes as ‘rape’)
A UN-survey in 2015 came to the conclusion that for Western countries Denmark and the Netherlands reported the most cases of sexual harrassment over a lifetime (19 and 18%) and in the last 12 months this was only 2 and 3%) Compared to most African countries i thought these numbers where quite high actually (they range mostly from 10 to 30% over a lifetime) But i think there is a lot of underreporting in countries like Congo, Sudan and the CAR where civil war is such a horror mostly for women. Oh, and Mexico, with all the drugrelated violence.
Ok, so basically intelligence is not neccesarily a prime factor for sexual harrassment. More like culture and wars and underdevelopment. Basically where life is pretty shitty for people. But that’s not a good scientific conclusion i’m afraid.